Something is very wrong with the Washington Post's Eugene Robinson. The proof is in the pudding or, in this case, the bowl full of stupid served up by Gene on Friday. His column, entitled "President Obama's winning streak", describes the under-appreciated management skills of #44. 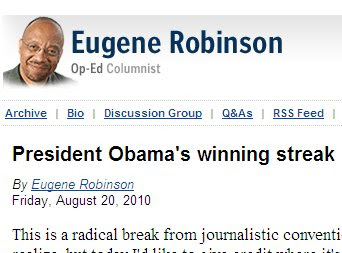 This is a radical break from journalistic convention, I realize, but today I'd like to give credit where it's due -- specifically, to President Obama. Quiet as it's kept, he's on a genuine winning streak... look at what he's accomplished in just the past few weeks. Let me highlight four recent headlines:

"President wades into mosque controversy" ... [On the wrong side, as usual]

He still hasn't walked on water, though. What's wrong with the man?

Back in the little land we like to call "Reality", Americans are suffering. In the nearly four years that the Pelosi-Obama-Reid Democrats have held Congress, the private sector has disappeared faster than a sack of Chips Ahoy in front of Rosie O'Donnell.

The Democrats have given us:

* Three straight years of job losses, an unemployment rate that has more than doubled to nearly 10%, and a true (U-6) underemployment rate of nearly 18%;

* A national debt that has ballooned to over $13 trillion, a catastrophic increase of 60%;

* A $787 (now $860) billion pork-, bribe- and boondoggle-laden "stimulus" bill, which not only failed to stimulate the economy, but helped bankrupt the country;

* Record high home foreclosures that the American taxpayer is on the hook for thanks to the Democrats' favorite job shops: Fannie Mae and Freddie Mac;

* Another "jobs bill" that cost taxpayers $18 billion, yet created no "jobs"... along with a $26 billion "teachers' jobs bill" that simply kicks the fiscal responsibility can down the road and rewards the AFT and NEA teachers' unions;

* The $700 billion TARP bill to bailout banks that couldn't balance their books; and...

* The 2,000+ page health care takeover bill, which leaves the American taxpayer on the hook for another $2.6 trillion to pay for this new "entitlement."

Yes, Americans are grateful for the work of the Obama Democrats. Stimulus. TARP. ObamaCare. $200 million in Stimulus propaganda construction signs. And union payoffs and political bribes -- used to pass this mess -- as far as the eye can see.

Good points all. However, there is ample evidence that TARP actually worked - which perversely for the Democrats was a Bush/Paulson deal. Many banks have paid back the TARP money with interest. The banks are flush again, having money on hand to make loans - unfortunately because of the Obama/Pelosi regime no one is confident enough to take on new debt which is the only thing that puts new money into circulation. Without new money the economy grinds to a halt.