I'm so confused by Eric Holder: waterboarding is torture, but broiling the skin of prisoners with a heat ray gun is just peachy

Famed bodybuilding guru Joe Weider used to have an exercise regimen called the Muscle Confusion Principle. His theory was that you could force your body to grow faster if you continually changed your workouts; by avoiding cyclical repetition, your body would be forced to adapt.

I'm thinking that Eric Holder borrowed the concept for his Department of 'Justice'. The Eric Holder Legal Confusion System™ appears to do the opposite of what you'd expect. Like pursuing Arizona for its enforcement of immigration law. Or dropping a slam-dunk voter intimidation case against members of the New Black Panther Party. Or attempting to try the 9/11 masterminds in civilian courts -- at Ground Zero. Et cetera.

If I told you that the Holder DOJ is funding a "heat beam ray", the application of which on prisoners many believe is "tantamount to torture", you'd dismiss it in a moment. After all, these are the same rocket scientists who believe waterboarding is torture (despite the fact that our own personnel are subjected to it in SERE School as a matter of course). But it's true -- Tampa Bay Online reports that Los Angeles will soon receive heat ray guns from the DOJ to use on prisoners. 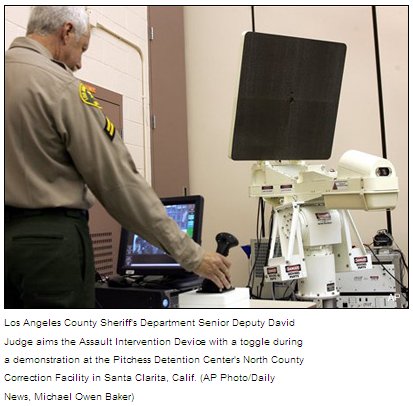 A device designed to control unruly inmates by blasting them with a beam of intense energy that causes a burning sensation is drawing heat from civil rights groups who fear it could cause serious injury and is "tantamount to torture."

The mechanism, known as an "Assault Intervention Device," is a stripped-down version of a military gadget that sends highly focused beams of energy at people and makes them feel as though they are burning. The Los Angeles County sheriff's department plans to install the device by Labor Day, making it the first time in the world the technology has been deployed in such a capacity... The natural response when blasted - to leap out the way - would be helpful in bringing difficult inmates under control and quelling riots, the sheriff said.

..."The neat thing with this device is you experience pain but you are not injured by it," Osborne said. "It doesn't injure your skin, the beam doesn't have the power to do that."

...The device was made specifically for the sheriff's department by Raytheon Missile Systems. Sheriff's spokesman Steve Whitmore said its $750,000 cost was paid for by a Department of Justice technology grant.

While the device was being tested by the Air Force, a miscalibration of the device's power settings caused five airmen in its path to suffer lasting burns, including one whose injuries were so severe that he was airlifted to an off-base burn treatment center.

According to a 2008 report by physicist and less-lethal weapons expert Dr. Juergen Altmann, "the ADS provides the technical possibility to produce burns of second and third degree . . . over considerable parts of the body, up to 50% of its surface," and "without a technical device that reliably prevents re-triggering on the same target subject, the ADS has the potential to produce permanent injury or death."

Waterboarding is torture, but broiling the skin of prisoners is just peachy?

Could someone help me out here?

at 10:53 AM
Email ThisBlogThis!Share to TwitterShare to FacebookShare to Pinterest
Labels: Crime, Democrats, Holder, MSM, Obama

"While the device was being tested by the Air Force, a miscalibration of the device's power settings caused five airmen in its path to suffer lasting burns, including one whose injuries were so severe that he was airlifted to an off-base burn treatment center."
Do you realize what this means? The damn thing has stun and kill settings. Can't wait for the hand held version. The death ray has arrived!

a silly teabagge: itz only torture if you do it to a jihadist or a leftist!

Hey, they need to develop something to control all those unruly teabaggers and Beckites threatening to go on violent rampages to make Obama, Pelosi,and Reid obey the Constitution. They obviously can't count on the police and the National Guard to go all Tiananmen Square on them.