I am outraged that the president has chosen rush hour to travel through LA, and that law enforcement has not adequately routed traffic elsewhere. Obama has single handedly alienated hundreds of thousands of voters leaving them stranded for hours, unable to get in my case a few blocks. I finally left my car illegally parked in a permit only neighborhood just to get home. If I get a ticket, I will most certainly contest it. It's very hard to understand the total lack of respect for the working class here. -- BBlair 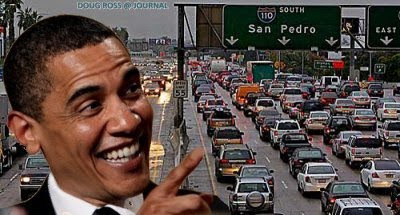 Hey, it could have been worse. Obama's policies have cost so many people their jobs that I'm sure the traffic volume was correspondingly reduced. Just think of how bad things would have been 12.2% of the city wasn't out of work. -- Charlie Foxtrot

Look at a Map of Los Angeles and estimate how many people move on that Map. Would you arrive at 3pm and shut down the 405 and then move eastward and completely shut down the small streets that millions of commuters use because they are no where close to a freeway, just to have a meal? If you do not live in Los Angeles you cannot make a comment. Move here pay to live here and then live here and then make a comment about what happened tonight. Cars were over heated. People had to leave their cars to walk home. About people walking to get water. Los Angeles is one of the driest places in the United States. Again live here and then speak. Get a map, ask some of the mother's stuck for hours and then talk to us about what happened. -- matflash

President Obama arrived in Los Angeles. For what? To pitch his failed presidency to a lot of Democrat fat cats who still think this total loser is the miracle worker. Note that the same Hollywood hacks - from creepy agents to old movie stars - are backing this failure. And he makes driving in Los Angeles worse than it is. I can't wait to vote against every incumbent on the ballot. Unfortunately, I can't vote Pelosi and Obama out of office. But in two years... Obama will be total history. He can go back to organizing neighborhoods. -- pasadena jag

Praise Obama! He must have been doing something really important, so all you people need to stop complaining. He could have been talking about the economee or how were going to get rid of Alqida or heal the world from the poison gases and oil leak. He's doing his best to make the world a better place so hwho cares if you were stuck in a little traffic. People are so selfish, just thinking about themselves while Obama is trying to help all of us. i love you Obama. Yes we can! -- Steve Blithe

I work in Beverly Hills and watched the traffic jam develop. I was essentially trapped in the office - my only choice would have been to drive the wrong way down a one way street so I could go north to Sunset.

I live in Playa del Rey with view that includes LAX departing flight paths over the ocean. What is particularly galling is that Sunday afternoon, I watched 3 Sea Stallion Ch53s escort 2 VH-3ds - Marine 1 and Marine 2 - into LAX. So - he had a chopper at hand...

This morning, the Sea Stallions and VH3s returned to LAX a little before 9am. On August 6th there was an uproar in DC about a Presidential visit to a sign company- Marine 1 was used instead of a motorcade which was deemed disruptive and expensive. 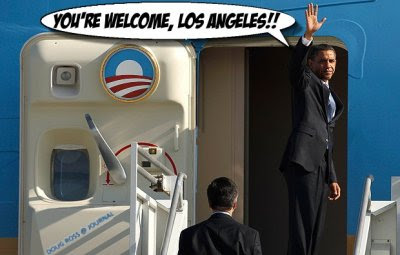 DC traffic can be every bit as horrible as LA traffic. One wonders why they didn't chopper him to his destination.

I had to abandon ship across the street from my house...only to be told that i could not walk across the street. My neighbors and I stared at the officer who was doing an outstanding job of playing the role of "silent scary guy" when we asked questions. When asked about crossing the street, we were literally told that we would be arrested by order of the federal government and that we could not cross until AFTER Obama left the fundraiser (this was at 7:20pm so we knew it would be a while). When asked how long he thought it might be we got a disinterested shrug. For those saying we're complaining about sitting in our air conditioned cars and to get a bike - nice try, but bikes, people, dogs...NO ONE was allowed to cross Olympic tonight. I gave up and enjoyed a cocktail at Marie Callendars on Wilshire until the street reopened. -- jg

That's it, I'm done. I even voted for him, but now I'm convinced that I'll vote for anyone but him in the next election. If this is how he handles something as mundane as a visit to Los Angeles, I have zero confidence in his and his team's ability to navigate the complex issues facing the country today. Who's the incompetent who figured it was OK to shut down Santa Monica and Olympic during rush hour? And how about the radio traffic reporters who said that they couldn't tell listeners which streets were closed because of "security." Someone should lose their job over this...in addition to Obama in 2012. -- Steve

Dear irritated LA, I feel for you. King Obama pulled the very same selfish type of stunt when he decided at the last minute to fly into Chicago's O'Hare airport so that he could have his birthday party with his Chicago political cronies. As a result, he completely grounded air traffic, caused numerous flight delays as well as flight cancellations (all at a major hub which jams up all other major hubs nationwide - I might add).

It makes you wonder why the boy-president couldn't he have just landed at a military base instead thus allowing the rest of the working, taxpaying-citizens of this country to actually try to fix our economy instead of use it as there own private meal-ticket? Consider the math and the ramifications for his selfish act ... and keep in mind that Obama's stimulus package sure as heck isn't going to pay back all those stranded business people let alone the airlines for the costs resulting in the aftermath of having to re-book everyone.

But hey ... I guess what's important is that Obama got to go to both his parties (albeit on the taxpayer's dime). Thanks Mr. President. You're a shining example of fiscal responsibility. -- Brad Wilson

100K commuters X 4Hours X $10 per hour. Cost in lost time $4M+   Add in the cost of the gasoline lost while idling. And the transportation costs via AF1. Hope it was worth it, BO. Maybe the plan is to just hit LA up for a $1M campaign donation for NOT visiting next time. -- OBQuiet

A million people can't get home tonight, and for what? So a tiny group of fundraisers can kiss Obama's butt for a few minutes? Tonight Angelenos learn what this President thinks of them. We are all nowhere near as important, trying to get home to our kids from our jobs, as the President's fundraiser. This isn't the first time it's happened either, but by far the worst. When he was here for Boxer's thing a few months back that was a traffic disaster as well. He really needs to stay the hell out of this city unless he can take his chopper to the event. -- Tom

Wow. That was a total, complete mess. Never seen a traffic jam in LA like that...and this is LA! How much money was lost by Angelino business and residents having to deal with that unnecessary traffic disaster? I bet you not anywhere near what Obama raised at his fundraiser with with an elbow-rubbing Hollywood producer. And least I talk about the hundreds of thousand of lives of Angelinos like myself who after a long day working just wanted to get home to their kids/family, but instead were stuck in their cars for three hours going in circles. I am an Obama supporter, so don't try ripping on this email as some excuse for party stance. I can be pro Obama and still appalled at that disaster. And yes, an apology is owed. -- Trafficstucker

8 yrs of Bush's administration and I never experienced anything like today. Luckily, I got out of west L.A. in the afternoon so I wasn't stuck for hours but they still closed Wilshire Blvd and parts of Santa Monica Blvd (even though Obama's plane wouldn't even land for at least an hour). I did have to walk about a mile to get to a bus stop - but what about the people who have mobility issues or little kids?

...Buses were being re-routed and the bus drivers didn't even know where they were going. People were waiting on Wilshire Blvd without a clue as to where to go to catch a bus because Metro (MTA) got limited information. Obviously Secret Service doesn't want to release the route they'll take for security reasons, but at least let LAPD and the city know which streets actually need to be closed. Let the bus agencies figure out where to detour their buses and let them inform passengers where to board. -- Cassie

Please, people, these are the elites, not to be bothered by your whining just because you had to spend hours gridlocked so they could whiz through empty streets with police and secret service escorts in the middle of rush hour(s). Know your place! You are the working tax paying drone class, here only to serve! -- nosanctuary1

what a nightmare. It took me 185 minutes to get home. Had I KNOWN about this, I would have stayed at work and relaxed or just gone out to eat but instead I was sitting in my car... for 185 minutes. Thanks LA. -- david goodberg

I forgot to add that I witnessed a few small car accidents during my 4.5 hour nightmare commute - and lots of drivers were swearing at each other, nearly fighting. This is simply unreal. -- DeeVee

Obama is the Marie Antoinette of the 21st century. -- Jim Appleby

But, folks, remember: Democrats are for the little people.