23,000 people have died in Mexico as a result of its ongoing civil war. It's gotten so bad that business executives in the once-safe capital of Monterrey have taken out full-page newspaper ads pleading for help.

The growing violence in Monterrey, long one of Mexico's most modern and safe cities, is a sign that the country's war against drug gangs is spreading ever further from poorer battlegrounds along the border and into the country's wealthiest enclaves. 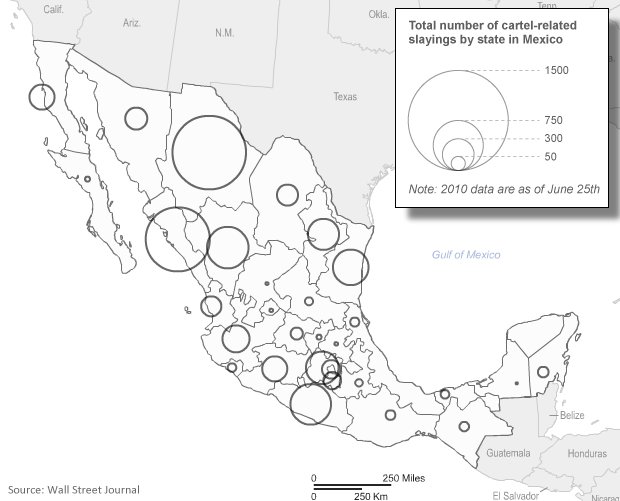 ...Residents opened their newspapers Wednesday morning to find the ads taken out by Mexican business leaders, begging the government to send more military into the city. "Enough already," said the notice that ran in national and local papers, criticizing what it said was a slow response of police against "criminal bands that in every act look to establish a new boundary of terror."

Later that day, the body of Edelmiro Cavazos, mayor of the Monterrey suburb of Santiago, was found beside a highway. Mr. Cavazos had been abducted Sunday night, the latest in a string of attacks against politicians in Mexico's north.

His killing is another incident in a terrifying spell for Monterrey residents that began Saturday when armed gangs set up more than a dozen roadblocks on key boulevards of the city, paralyzing traffic for hours...

...The next day, a grenade was lobbed at the offices of an important television broadcaster. On Tuesday night, grenades were also hurled at several small businesses on the city's outskirts...

...The brutality of the conflict is escalating. Alleged gang hit men broke into the home of a Chihuahua state policeman this week and strangled to death his 4-year-old brother, authorities said...

...Across the country, mutilated and decapitated bodies turn up virtually every day, sometimes hanging from bridges.

It wasn't always this way in Monterrey. Mexicans know the city of 2 million as "The Sultan of the North," a nickname stemming from its wealth, generated by corporations such as Mexico's beverage titan Femsa S.A.B. de C.V. and U.S. businesses such as Whirlpool Corp. and General Electric Co., which have large offices in Monterrey. International architects built the city's skyline, which is framed by dramatic mountains.

As the civil war inside Mexico's failed narco-state spreads, border security will become an increasing concern.

The violence, drugs and refugees spreading into our country would tax even an economically healthy United States. And, thanks to the Obama Democrats, our country is anything but.

That is why the Democrats' failure to enforce immigration law is doubly insane.