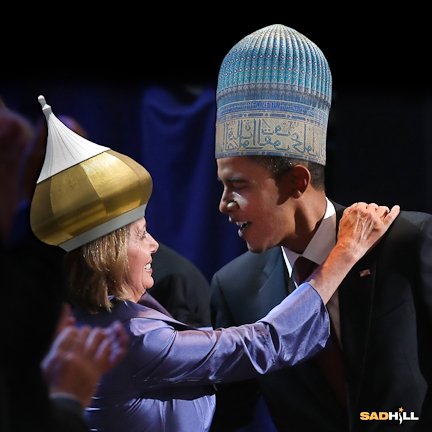 Answer: Nancy Pelosi's repeated calls for an investigation into the funding of... not the WTC mosque, mind you, but the opposition to the mosque.

I'll save Pelosi the time, effort and cost related to the investigation. She can start with a subpoena of the 9/11 families who were stunned by the President’s support of the Ground Zero mosque. I'm sure that would go over well with the American people.

There is something fundamentally and deeply wrong with Nancy Pelosi.

"There is something fundamentally and deeply wrong with Nancy Pelosi."

Hint: It starts with the letter
D and adds EMOCRAT!

Stranger? Maybe having OBL over for tea.

Pelosi is the Mother of Health Care, the Provider for her husbands business and a power mad woman the likes of Empress Lu Zhi.

So, I still encounter Democratic Partisans who are trying to deny the utter failure, insanity, negligence, incompetence, etc., of today's Democratic Party.

I love this post, as the ROSS Blog strikes again.

But what can one say for the fools who voted for the Democratic Party?

Some are in such denial, others have an insecure pride, others are stuck on the Democrat Dole, etc., there is almost no point.

Even if they actually were no longer blinded, grew with some new insight, payed a little attention, etc., they would still help further sink all today for their absurd Partisan Bigotry.

There are actually those so spiteful, they are so lost, they simply cannot be honest and say, "I was mistaken".

Obama and the Democrats have lied about everything, and once again FREDDIE AND FANNIE are leading the DNC TITANIC. The lied about Lobbyists, Earmarks, Transparency, GITMO, Immigration, Signing Statements, Executive Orders, Taxation, etc.

And everything they have done, including that disastrous Obamacare, is making all miserable. They actually said it would cut costs! And already costs are directly skyrocketing in Health Care because of the Democratic Partisans disastrous offering.

You just cannot make it up...

Keep up the great work Doug and thanks for sharing our stuff. Glad Michelle passed it on.