In Touch: Deb Wasserman-Schultz (D-FL) proclaims "the recession is over"

Rejoice, Floridians: just below this sentence and to the left is the kind of dynamic intellect representing you in Washington. 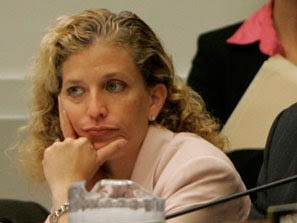 Interviewed on Fox News by Greta Van Sustern this evening, Rep. Debbie Wasserman-Schultz (D) told viewers that the Great Recession is over. Those were her exact words: "the recession is over."

This should come as uplifting news for business owners and the unemployed, all of whom are suffering through one of the worst fiscal downturns in decades.

Wasser-Schultz is one of the more outrageous Democrats in Congress -- difficult though that may be to believe -- for her serial policy failures. For months now, WaSchultz has been proclaiming the success of the Obama Democrats' economic leadership. Plus health care. She really likes socialized health care.

...Insisting that her Congress and the Obama Administration are focused on “job creation and turning the economy around”, Congresswoman Debbie Wasserman-Schultz unloaded a whopper of a claim. As she was directly asked about our nation’s 10 percent unemployment rate, Rep. Wasserman-Schultz made the very dubious assertion that, “On the pace that we’re on with job creation in the last four months – if we continue on that pace – all the leading economists say it is likely that we will have created more jobs in this year than in the entire Bush Presidency."

Did I just hear a lie detector explode somewhere in the distance?

And this is the same rocket scientist who claimed a few months ago that there was no individual mandate in ObamaCare, stating: "We actually have not required in this law that you carry health insurance."

So what can you and I do? Support Karen Harrington for Congress. Seriously, donate a few bucks.

Since this is now officially a Depression, I suppose she is technically correct! Give that girl some props for speaking the truth!

Outstanding post, and I hope Harrington pulls it off. Will try to send something her way to help out.

For defeating Wasserman-Schultz would be a great improvement to our fine Nation.

She was one of the ugliest liars prior to 2006 and 2008, in regards to trying to debase the Bush Administration, the essential fight in the GWOT, for her own cheap Partisan political gain.

Wasserman-Schultz tells a lot of whoppers, and should never have been allowed near the US Congress.

But truly the recession is over. Because we've moved into a depression.

This is wonderful news! Apparently, I'm no longer one of the 10% unemployed, but now I'm a lazy bum who won't work. After all, if the recession is over, the only reason I'm not working is because I'm lazy. Surely now that it's over, there are millions of jobs for me, right?

She makes me ashamed to be a Jew.

But I would still hit it.