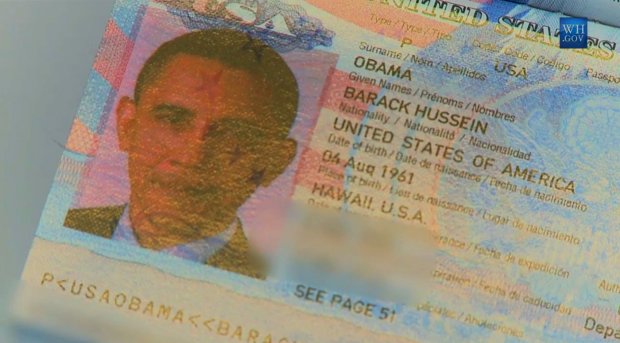 Now, personally, I could care less where Obama was born at this point -- he's done a damn fine job ruining the country regardless.

But the Journolist-wannabes at Politico appear to have missed the point.

Why are the issue and expiration dates redacted?

Under what sort of passport did Obama travel to Pakistan in his college years?

As Jake Tapper reported during the campaign: 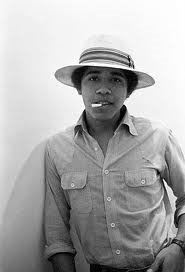 "I traveled to Pakistan when I was in college -- I knew what Sunni and Shia was [sic] before I joined the Senate Foreign Relations Committee."

This last part -- a college trip to Pakistan -- was news to many of us who have been following the race closely. And it was odd that we hadn't hear about it before, given all the talk of Pakistan during this campaign.

So I asked the Obama campaign for more information.

Apparently, according to the Obama campaign, In 1981 -- the year Obama transferred from Occidental College to Columbia University -- Obama visited his mother and sister Maya in Indonesia. After that visit, Obama traveled to Pakistan with a friend from college whose family was from there. The Obama campaign says Obama was in Pakistan for about three weeks, staying with his friend's family in Karachi and also visiting Hyderabad in Southern India.

Or would that be racist?

Too funny - that Journolista, Josh whatshisname is getting hit pretty hard in the comments, over there.

The question is: under what passport did he travel in 1981 to Pakistan, right?

With redacted dates, this is useless. Also, in 1981, when he traveled to Pakistan, BHO would have been 20 years old, and that's not a picture of a 20 year old BHO on that passport.

And why in the world would one redact the dates? What would showing them reveal? Oh, yeah. Right.

Poor little Birthers (still in denial about their losses), but our Judges will continue to smack down the crazies .

To all the birthers in La, La Land, it is on you to prove to all of us that your assertion is true (TOUGH WHEN YOU KEEP LOSING CASES), if there are people who were there and support your position then show us the video (everyone has a price), either put up or frankly shut-up. I heard Orly Taitz, is selling a tape (I think it’s called “Money, Lies and Video tape”). She is from Orange County, CA, now I know what the mean when they say “behind the Orange Curtain”, when they talk about Orange County, the captial of Conspiracy Theories.

You know Obama has a passport, he travel abroad before he was a Senator, but I guess they were in on it.
In my opinion the Republican Party has been taken over the most extreme of clans; the Baggers, Birthers and Blowhards (people who love to push their beliefs on others while trying to take away the rights of those they just hate) and that’s who they need to extract from their party if they real want to win in November. Good Luck, because as they said in WACO, “We Ain’t Coming Out”.

I wonder if Orly Taitz, is a mail order bride, just like her law degree? She is perfect reporter material for “Fake News”, where unfounded rumors and innuendo reign supreme, unlike a our US courts of law. The way our courts work is that you get a competent lawyer, verifiable facts and present them to a judge, if the facts are real and not half baked lies, then, and only then, you proceed to trial. The Birthers seem to be having a problem with their so called facts that they present. Let’s face it no one will go along with you until you guys win a case, but until then, you will continue to appear dumb, crazy or racist, or maybe all three. A lawyer, dentist, realtor and black belt, WOW I must say a JACK of all trades master of none.

We won the election and now these sore losers will continue to spew their hate with lies.

That is not the format for passports in 1961.

Re what Anonymous says "Funny thing is,if you try to use the certificate of live birth to get a passport,you can't get one."

This is simply wrong. THOUSANDS OF PEOPLE IN HAWAII USE THE CERTIFICATION OF LIVE BIRTH TO GET THEIR PASSPORTS EVERY YEAR.

The Certification of Live Birth is the official birth certificate of Hawaii, and it is the only one that Hawaii has issued since 2001.

Re: "Just because the guy's grandmother and sister say they were there in the Mombassa Kenya hospital when he was born."

American citizens were NOT forbidden to visit Pakistan in 1981 when Obama went, so Obama could have traveled on the US passport that he received in 1965 when he went to Indonesia with his mother, and he did because he never had an Indonesian passport (as a call to the Indonesian Embassy establishes, just call yourself to check0 and the same holds for a British passport (ditton) or a Kenyan passport.

Obama MUST have had a US passport when he returned from Indonesia to attend school because otherwise he would have had to have applied for a visa, and if that were the case, there would have been a record of it.

Thus Obama traveled to Pakistan on his US passport.

The answer is that they are not missing. Obama simply has chosen not to show them. Why should he? He was obviously in far better shape than McCain (who would not let reporters take notes when they looked at his medical files), and no president has ever shown complete college transcripts.

Some birthers are also asking for Obama's parents' marriage license and for his Kindergarten records (which probably do not exist anymore).

The short answer is that Obama does not have to provide such records. Is it being 'transparent' not to provide them? Answer: He never said that he, or any member of his administration, had to be transparent about personal affairs. He only talked about transparency in government.

It is COMMON KNOWLEDGE that "obama" has a US passport. It was issued to him AUTOMATICALLY when he became Senator. There were no background checks required or proof of citizenship required at that time, since he had been in the State Senate, then US Senate. It's diplomatic. If they have redacted the date it was issued - that tells you everything. The new book: "Obama-Ineligible to Serve - Lies, Crimes and Deadly Ambition" is available at Amazon and other sellers--read it no matter what party you are affiliated with. It explains ALL the legal facts as to why Obama is NOT ELIGIBLE under the Constitution to be President.

Obama's election was confirmed UNANIMOUSLY by the US Congress. Not one member believed that he had been born outside of the USA or lost his US citizenship or that the citizenship of his father affects his Natural Born Citizen status.

Then he was sworn in by the Chief Justice of the United States, who also did not believe that Obama was born outside of the USA, lost citizenship or that his father's nationality affects Obama's Natural Born Citizen status.

Obama was born in Hawaii, as his official birth certificate from that state shows, and the facts on the birth certificate were confirmed twice by the officials of the state of Hawaii, and by the governor, Linda Lingle, a Republican.

Obama's Kenyan grandmother never said that he was born in Kenya. She said in the taped interview repeatedly that Obama was born in Hawaii, and she said in another interview that the first that her family in Kenya had heard of Obama's birth was in a letter from Hawaii.

We need to ask Obama "WHY?"

why are all his records sealed away?

why does O, at this time, decide to let us see his passport, sort of?

why would he go and redact essential information therein?

why would he not, in one simple move, make fools ot of all the birthers, if he could? (birth certificate)

Funny, but for all the finger-pointing at the right and the so-called "Birthers", I see no mention that the whole concept was originated as a campaign strategy by one Hillary Clinton.

And, as any one of reasonable intelligence could hardly deny, this whole misunderstanding could be put to rest by simply producing a birth certificate.

True or not, over 40% of Americans now believe Obama is NOT a natural-born citizen of this country. The damage has been done.

It really doesn't matter, one way or another. It will take some time, but all the garbage forced upon us by this one-term imposter can be reversed.

The facts on Obama's birth certificate were confirmed twice by the officials in Hawaii and most recently by the governor of Hawaii (a Republican). There is also this witness, who recalls being told of Obama's birth in Hawaii by a doctor at Kapiolani Hospital and writing home about it (about a birth to a woman named Stanley to her father, also named Stanley) http://www.freerepublic.com/focus/f-news/2170432/posts

By now I'm sure someone has told you that he could have easily traveled to Pakistan in 1981, as MANY Americans did at the time, under a US Passport.

Travel warnings and advisories, such as those in place in 1981, do not prohibit Americans from travelling to certain countries. They simply warn them against inherent dangers.

Also, the dates and passport number are redacted for privacy reasons, just as you might do if you posted a photo of your own passport online.

My husband used a certificate of live birth in Colorado to get his passport. If it is notarized it works fine. When I sent to get our kids birth certificates, what they told us is that a Certificate of Live Birth IS a Birth Certificate. How crazy!

"he's done a damn fine job ruining the country regardless"