Oh, for Thomas Friedman to be in China for a day

Remember when The New York Times' token intellectual wanted the U.S. "to be China for a day [to] authorize the right solutions?"

A 60-mile traffic jam near the Chinese capital could last until mid-September, officials say... Traffic has been snarled along the outskirts of Beijing and is stretching toward the border of Inner Mongolia ever since roadwork on the Beijing-Tibet Highway started Aug. 13. The following week, parts of a major road circling Beijing were closed, further tightening overburdened roadways. 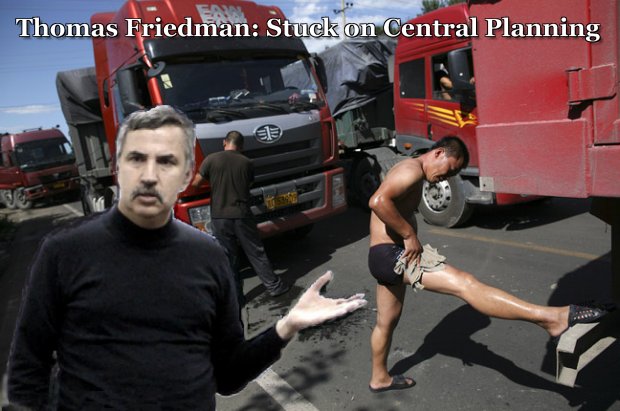 ...Though triggered by construction, the root cause for the congestion is chronic overcrowding on key national arteries.

If we could only hand over the keys to our government to a bunch of Statist masterminds for a while, things we be soooooo much better. Like in China.

On a subway, reading about this fiasco in China, an associate said the same thing about Mr. Friedman.

Where do we get, these mindless Democratic Partisans, giving such terrible offerings, promoted overtly in such grand venues?

What happened to substance?

When did someone so poorly conceived, get paid for such clap trap?

Vivid signs of the decline of this disastrous Democratic Party.

Next we will see them tell us how much they admire the growing prison of Venezuela.

The DNC Titanic continues, and Friedman has a big hand in the sinking of all.

An hour before seeing your post, I read about this traffic jam at Yahoo. They said,
http://news.yahoo.com/s/afp/20100825/od_afp/chinaroadtrafficoffbeat

that the jam cleared up already.