Prepare for the powerful thrusts of the Obama recovery. 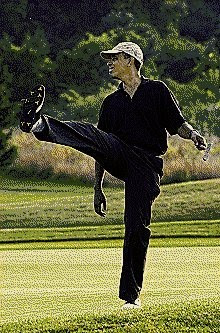 As our economics team has highlighted, the policy implication of most pressing concern is the expiration of Bush tax cuts. They estimate an impact of 2% annualized reduction in household income worth about 1.3% of GDP, and that such an increase if not reversed could trigger a double-dip recession.

...The political shifts affect that outcome with one school of thought that a divided congress raises the odds of no legislation (and hence a default scenario of expiration). In the face of increasing evidence of a slowing economy, a compromise to avoid a fiscal tightening that could exacerbate the risks of a double dip likely rises, in our view. The question will be one of timing – can a compromise be reached ahead of the election (in our view, unlikely), in a lame duck session (again unlikely).

...In our view, that leaves a retroactive extension passed in January as the most likely compromise. But the damage to confidence in the intervening period may already be done under such a potential scenario. A further deceleration in the data may yet change that assessment, but in the intervening period, political uncertainty will not positively contribute to the economic outlook already diminished by a successive wave of negative data.

I can summarize this in one sentence: Democrats are economic illiterates.

By the way, you can also thank John McCain for the expiration of the Bush tax cuts. 'Cause he's a 'maverick'.

Great photo - is the President out for his daily Uberwalk?

Hilarious site! I have heard of the dumbing down of America but I hadn't seen it so blatantly exhibited. Apart from bitching about what you don't like in the manner of a held back tenth grader have you ever actually had an original idea? For instance, do you always put such faith in banking executives opinions when it comes to the economy? I understand...what have banks ever done to hurt the U.S.? Right?

Of course, it's all so easy and simple. Mark your targets, those who are responsible for everything wrong with the country, and vilify them with "satire" (even if you have to steal Rickle's persona and Dangerfield's jokes to do it). Yeah, you're doing a great job helping the U.S.