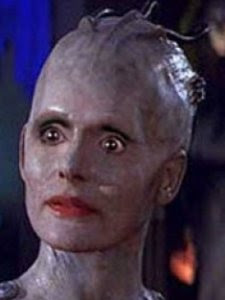 Seriously. Something is very, very wrong with the Speaker of the House.

In an interview with KCBS radio, House Speaker Nancy Pelosi (D., Calif.) yesterday called for a congressional investigation into opposition to the Cordoba House, "There is no question there is a concerted effort to make this a political issue by some. And I join those who have called for looking into how is this opposition to the mosque being funded."

Is there a medical phenomenon related to an overdose of face-lifts? A brain-squeeze effect or something?

So who is funding Pelosi's face-lifts?

The answer is likely as obvious as the answer to her question about the mosque's opposition, but since this lady is third in line from the presidency, we can't be too careful.

Investigate and prosecute. The witch looks good in orange.

Please refer to her by the moniker she prefers: Stretchy McHugegavel.