It was Mark Levin, I believe, who first observed that "Democrats are like locusts -- they destroy everything they touch; moving from state to state with their Utopian schemes, destroying one after the other."

The 2010 Census results confirm this assessment, revealing today that residents and businesses are fleeing Blue States like Tokyo after Godzilla's first dance-dance revolution. Don't believe me: check the maps. First, here's the official Census guide to Congressional puts and takes. 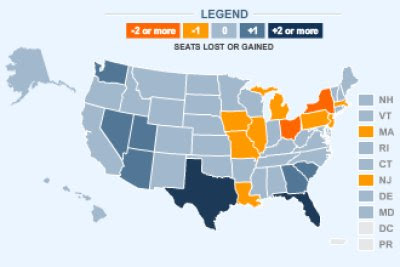 Now let's compare that map to the 2008 Electoral College results. 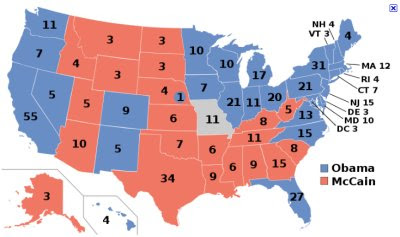 
Remember that the 2008 results were skewed thanks to a slobberingly complicit media and a branding campaign worthy of a new Verizon phone. All those factors notwithstanding, however, the GOP appears to have gained 11 House seats and Electoral College votes.

Gee, I'm no Fred Einstein, but we could be detecting a trend. Barack Obama and the Party of Massive Economic Destruction (which is the slogan they prefer, I hear) could be positioned for a 1980 Carter-style implosion or, better yet, a full-frontal Dukakis. All it takes is some hard work mobilizing real Americans to protect the Constitution.

Linked by: Michelle Malkin. Thanks!
at 7:41 PM
Email ThisBlogThis!Share to TwitterShare to FacebookShare to Pinterest
Labels: Democrats, Economy, Obama

"I left NY" could be the new meme. I did, when Hillary came. Best thing I ever did.

Unfortunately, the locusts don't suddenly become eagles when they cross the state line....I've lived in Colorado for 45+ years and have had to watch in abject horror as the Californians have taken over our state's government. We have two liberal, progressive Senators in Congress and at the state level, new laws and regulations coming in hard and fast to keep us thinking liberal thoughts.

The bigger challenge is keeping the culture of liberty and independent behavior free from the bleeding heart liberal who just 'knows' the right answer to save the backward and religious.