Does the Estate Tax Contribute to the Destruction of the American Family Farm? Media Matters Says No, Which Means... 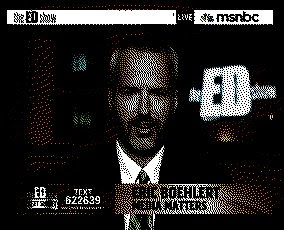 ...it does. Without a shadow of a scintilla of a flicker of a doubt.

The return of the Estate Tax impacts many small businesses, but most especially family farms. These estates possess wealth in the form of real estate and equipment but are taxed at obscene rates -- as if their assets were liquid. Often times, these awful tolls result in estate liquidations after business owners pass away.

The ham-handed propagandists at Media Matters attacked MSNBC's Joe Scarborough for mentioning this uncomfortable fact during Wednesday's broadcast of Morning Joe ("Scarborough advances family farm myth in attacking estate tax"). It represents the fourth time this month that the Soros-funded front group has promoted the return of the tax.

But does the return of the Estate Tax really endanger family farms?

In 2009, no less an authority than the Obama USDA said it does, issuing a cautionary report in Amber Waves, its quarterly economics journal.

While the aggregate importance of Federal estate and gift taxes is relatively small, their potential effect on farmers and other small business owners has been a major concern among policymakers. These groups are more likely than the general public to owe estate taxes, and much of the concern focuses on the ability of the next generation to continue operating and investing in these family-owned businesses. For many farms, business assets account for a large share of the owner’s estate. In such instances, estate tax liabilities not only drain the business of funds that might otherwise be reinvested, but could also force the liquidation of business assets. 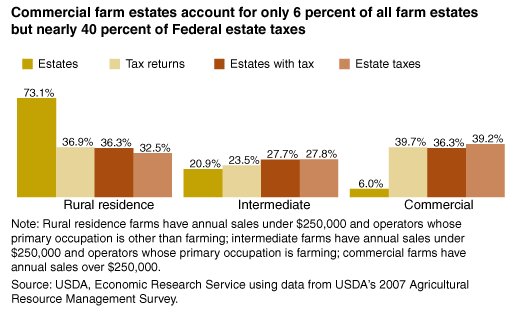 ...Providing tax relief to farmers and other small business owners was also an impetus for the Economic Growth and Taxpayer Relief Reconciliation Act of 2001 (the 2001 Act). The 2001 Act reduced Federal estate and gift tax rates and substantially increased the amount of property that can be transferred to the next generation free of Federal estate tax, culminating in the complete repeal of the tax in 2010...

The USDA states that in 2007 40% of all U.S. estate taxes were paid by farms. And it predicted that a quarter of farm estates would be required to file an estate tax return in 2011.

Unfortunately, the federal estate tax does much to steal the joy of keeping the farm in the family. Estate taxes are especially harmful to farmers and ranchers because their businesses are capital-intensive with a high concentration of assets tied up in land, buildings and equipment... ...80 percent of farm and ranch assets are land-based. When estate taxes exceed cash and other liquid assets on hand, surviving family members may be forced to sell land, buildings or equipment needed to keep the business operating. 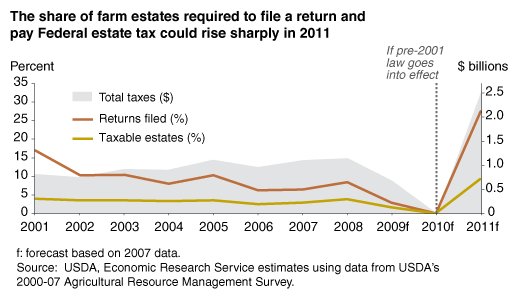 There are many reasons why the estate tax is unfair. It amounts to double taxation, because the income is taxed first when it is earned and again when it is transferred to heirs. Eliminating the estate tax will encourage farmers and ranchers to keep the businesses in the family.

So we have the Obama USDA and the Farm Bureau Federation directly refuting Media Matters. We'll call this Chapter 86,204 of the Soros-ians failed propaganda efforts.

Piercing the veneer of the Democrats' estate tax propaganda

If the Democrats really wanted to tax the estates of billionaires, they could simply propose an Estate Tax to do so. But they haven't. And they won't. After all, some of their biggest contributors -- from Warren Buffett to Bill Gates -- are billionaires.

No, Democrats are intentionally targeting small businesses and especially family farms. They want to see them broken up, sold off and unionized.

Once these small businesses are absorbed into larger corporate entities, they become ripe for unionization and illegal immigration. More union members means more dues; which, in turn, means more contributions to the Democrat Party.

Democrats are insatiable power addicts. And an onerous Estate Tax aids their pursuit of power in three ways: it hastens the corporate takeover of small businesses, it lines the pockets of their crony capitalist pals like Jeff Immelt, and it ignites mass unionization.

Piercing the veneer of the Estate Tax reveals a truly ugly side of the Democrat Party. And it's one that Media Matters is more than happy to promote, no matter the cost to its already tattered reputation.

Democrats are scum, pure evil with mental problems that know no limits.

A little help from our friends in the Senate!

Why should we worry about the farmers, didn't the US just give or 50,000 farmers billions of dollars for the way the Farm Bureau treated them? Oh, they were 50,000 Black farmers who have niether farms or estates to lose?
Never mind.

Don't you think It's a little too soon to be assuming that the tax would mean mass unionization of small farms? I'm not a fan either, these businesses are valuable to the economy and I'd rather had 100 small family firms than a corporation, but I think they should cope well enough as MWTexas pointed out.