Curiously, this headline isn't getting much play in legacy media: 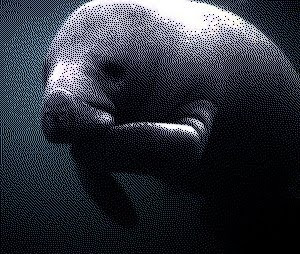 Florida's record number of manatee deaths in 2010 — 699 — were largely blamed on the severe cold last winter. And that count could rise with more cold temperatures expected next week...

...Last winter's freezing temperatures gave many manatees an acute cold shock, like severe hypothermia, that killed them faster than in previous winters [and] the cold weather spread as far south as the Everglades and Florida Keys, areas where manatees usually don't see many cold-related deaths... 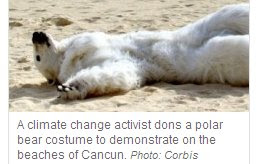 As negotiators from nearly 200 countries met in Cancun to strategize ways to keep the planet from getting hotter, the temperature in the seaside Mexican city plunged to a 100-year record low of 54° F. Climate-change skeptics are gleefully calling Cancun's weather the latest example of the "Gore Effect"...

...ClimateGate was "bad enough," says Duncan Davidson in Wall Street Pit, but Cancun's weather is particularly "inconvenient" for global-warming alarmists. It's a reminder that global temperatures have "flatlined" despite rising carbon dioxide levels, "which is decidedly chilling against the concept of hampering economic growth to limit Co2 emissions."

While the EPA prepares to implement cap-and-trade by edict, the world appears to be entering a new Ice Age. But, now that I think about it, that's the kind of epic fail we've come to expect from Democrats.

When evidence piles on evidence, one has to wonder what the blinders are made of that the Democrats and the Gore-ites can't see what is all around them.

Makes you wonder how much evidence of cooling will be necessary for them to take the blinders off.