A journalist from the The New York Times accompanied Bill Richardson on a private diplomatic trip to the DPRK (Democratic People's Republic of Korea, aka North Korea) and relayed a description of a miserable, desperate and starving society. 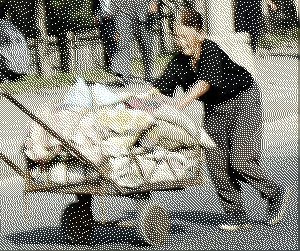 Of the nation’s 24 million citizens, the three million in Pyongyang are the most privileged. North Koreans need a special permit to live or come here. Still, signs of hardship are evident.

Commuters crammed into decrepit electric buses, packed as tightly as boxes of toothpicks. Pedestrians bowed beneath huge bundles strapped to their backs, apparently stuffed with goods for trade in private markets that have eclipsed the ill-supplied state stores. Most were women; one collapsed on the sidewalk under the weight of her load.

Economists say coal production is, at best, half that of two decades ago, and Pyongyang has regular power shortages. At the elite Foreign Language Revolution School, students warmed themselves around stoves fed by coal or wood. In much of the city, residents report only a few hours of electricity daily...

The DPRK's recipe for government is simple to understand: an all-powerful, centralized government that dictates every aspect of individuals' lives.

I have an honest question for the article's author, Sharon LaFraniere.

The Constitution purposefully and carefully set limits on the powers of the federal government. But if government ignores those limits to control more and more aspects of our lives, what prevents this society -- our society -- from descending into the same, nightmarish central planning endgame? 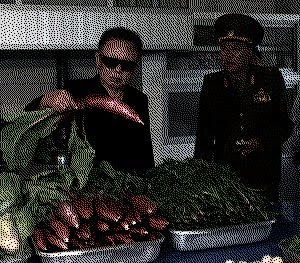 Is there a successful model that Democrats can point to? Cuba, Zimbabwe, North Korea and the Soviet Union are authoritarian societies that represent the failed "progressive" model taken to its inevitable conclusion.

'But those models are too extreme,' the progressive might retort, 'Democrats would never descend into a totalitarian, unchecked political regime of that sort.'

Fine. Then what are the limits on the Progressive Democrat Party? What amount of taxation would be sufficient? How many people should be categorized as "rich"? How many more aspects of our lives -- besides health care, energy, automobile design, carbon dioxide emissions, credit card interest rates, education -- must be controlled before Democrats say 'enough'?

Democrats never have -- and never will -- offer an answer to that question. And their view into the tragic, failed society of North Korea is a simple error: unintentionally revealing their endgame for all to see.

We sure got a good look at the "unchecked authoritarian agenda" of progressives in this last, finally-leaving Congress.

They admitted they didn't legislate with the Constitution in mind. In fact, the very idea made Pelosi start laughing.

Even the current "checks" don't work. They took the Death Panels out of ObamaCare and he just signed an executive order this past week putting them back in -- i.e., doctors can now be reimbursed when they talk to their elderly Medicare patients about euthanasia.

THERE IS NO LIMIT.

I used to be in favor of abortion. Now it has become infanticide and designer babies. We're just the Roman Empire in free fall, but with cell phones.

This message needs to be posted on billboards, blogged about, taught in school etc.