CNN reports $5 gas in 18 months thanks to collapsing dollar, poor planning, and Obama oil drilling bans, but mostly all of the above

The former president of Shell Oil is predicting $5/gallon gas by the summer of 2012, which should do wonders for "the middle class".

In an interview with Platt's Energy Week television, Hofmeister predicted gasoline prices will spike as the global demand for oil increases... "I'm predicting actually the worst outcome over the next two years which takes us to 2012 with higher gasoline prices," he said... 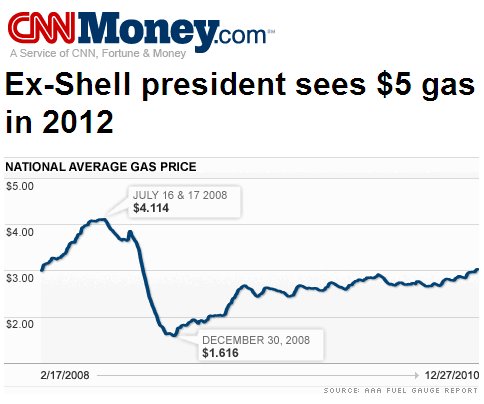 ...Gasoline prices have been steadily rising. Last week, gas prices crossed the $3 mark for the first time since October 2008. According to AAA figures, prices are up 4% from a month ago and 16% from the $2.585 average a year ago...

In 2008 President Bush used his bully pulpit to cajole the Democrat-controlled Congress into expanding oil drilling. The Democrats refused.

After the BP spill, the Obama administration used the crisis to lock down even more drilling, going so far as to lie about a panel of experts' decision to continue a drilling moratorium. The federal Judge hearing the case called the administration's claims "untrue" and "misleading".

The net result is that the United States is the only country on Earth that restricts access to its own abundant energy resources. I wonder how high gas prices have to get before Democrats are smashed into oblivion -- politically, of course -- leaving them a footnote to history akin to the Whig Party.

Thankfully, the unemployed have all of those millions of high-paying green jobs to look forward to. Or so the Democrats keep telling us.

And in Obamaland, all is going as planned......

How high will it have to go for the Dems to allow for drilling?

Well, the sky's the limit:

Thankfully, when it does go that high again, my primary transportation (1900cc Roadliner) gets nearly 42 MPG, while my other bike gets closer to 50 mpg.

Why must democrats only be smashed into oblivion politically? Somebody needs to go to prison for this!

What a great way to limit mobility for a lot of people!