The Photos Legacy Media Won't Show You: Hezbollah in Venezuela and The Most Heavily Guarded 'Tractor Factory' in the World 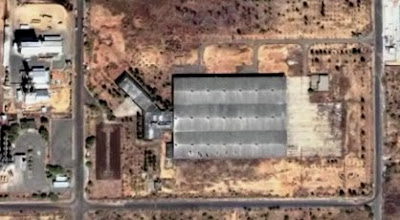 "This is the most heavily guarded 'tractor factory' in the hemisphere... basically it is a military-style compound... it is a high-security facility that is accessible only to Iranians... we've had Venezuelan officials who've said they've ... been denied access. 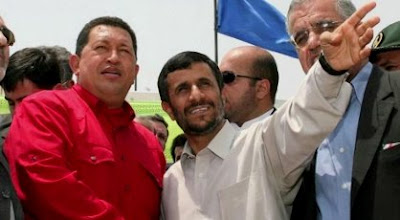 ...it's in the middle of nowhere, but not far from that uranium deposit... absolutely [true that Mahmoud Ahmadinejad has visited this 'tractor factory' in recent years]..." 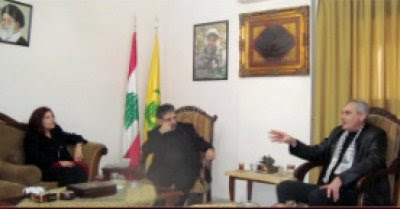 "Hezbollah has a very established presence in Venezuela... there's a lot of fear that because... Hezbollah has room to stretch that it will adversely impact American security... 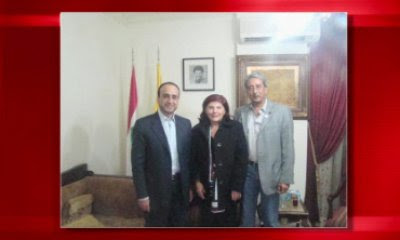 [We have pictures of Venezuelan officials meeting with Hezbollah... in Beirut... this is Hassan Nasrallah, head of Hezbollah, in the room...] 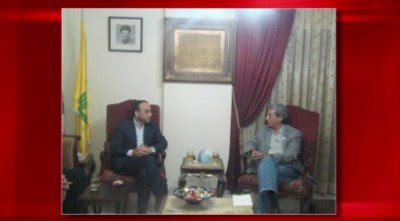 [Venezuela isn't trying to hide it, they're openly meeting with one of the world's most notorious Islamic terror groups, which has actually killed many Americans.] "Well, these are actually 'family photos' that we've been able to acquire from some of our sources, so they're not shouting it from the rooftops,.. our government should be asking the question, 'what is the Venezuelan ambassador to Lebanon and Syria... doing meeting with the head of Hezbollah's intelligence apparatus?' You have a lot of radicals in the Venezuelan government with ties to the Middle East -- and that's another disturbing fact... 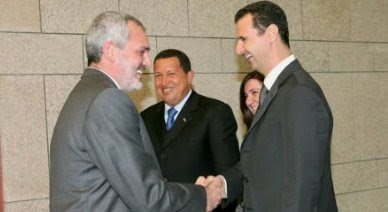 [Gassan Uteb... Abu-Ali] is a Venezuelan citizen as of about ten years ago, he arrived there from Lebanon, he is now the [Deputy Chief of Mission] of the Venezuelan governement in Syria. We heave a photo of him meeting with [Syrian dictator Bashar] Assad... this fellow is a designated terrorist by the U.S. government for supporting Hezbollah -- and he's a Venezuelan diplomat... [Yes, it's correct that a globally designated, high-ranking terrorist is a Venezuelan diplomat]... he's one of several, as a matter of fact, he has a network back in Venezuela that he works with in terms of coordinating relationships with Hezbollah... not only in Venezuela, but elsewhere in Latin America.

Where is the State Department on this story? Where is the President? And where is legacy media?

The same group of murderous thugs who killed 241 U.S. Marines in Beirut is roaming freely throughout Latin America?

And Venezuela is assisted by Iran's missile-guidance and nuclear scientists in a secret facility near a uranium deposit?

The description in The Atomic Mahdi still stands:

According to 'Twelver' Shi'a Mulims, Imam Hujjat al-Mahdī ( المهدى) is the twelfth Imam and the Mahdi, the ultimate savior of mankind. Twelver Shi'as believe that Muhammad was born in 868 and has been hidden by God (referred to as occultation) to later emerge to fulfill his mission... Shi'as believe that Muhammad al-Mahdi will reappear when the world has fallen into chaos and civil war... ...In a speech several years ago, Iran's president Mahmoud Ahmadinejad stated, "Our revolution's main mission is to pave the way for the reappearance of the 12th Imam, the Mahdi." [And] Princeton professor Bernard Lewis observes, "There is a radical difference between the Islamic Republic of Iran and other governments with nuclear weapons. This difference is expressed in what can only be described as the apocalyptic worldview of Iran’s present rulers..." ...The most dangerous leaders in history are those like Hitler, Hirohito and Ahmadinejad, fueled by a totalitarian ideology and a mystical belief system. Ahmadinejad accepts that the return of the 12th Imam is imminent. Furthermore, he is certain of his own duty to hasten the Mahdi's return. This explains the many years of hidden preparation as Iran built its nuclear weapons, which are designed to both mete out punishment to the non-believers and pave the way for the apocalypse.

These are very treacherous times.

And they're compounded by the fact that our government and legacy media are controlled by incompetent ideologues. You may know them as Democrats.

Hezbollah appears to have free rein in Latin America, yet Democrats can't stop pandering to various ethnic front groups by protecting the American people through effective border control. I hate to say this because it sounds far too morbid, but people will die -- innocent Americans will die -- because of this lunacy.

if we got attacked via missiles launched from venez then venez would get whacked in return. BIGTIME.

Remind we why we have a CIA again?

Oh wait, I forgot, they have to have orders first