The pilot who documented several massive, gaping holes in airport security has come forward. Sacramento's News 10 has an exclusive report identifying the pilot as Chris Liu. Curiously, the first reaction of DHS head Janet Napolitano was not to address the vulnerabilities. It was, instead, to punish the pilot. 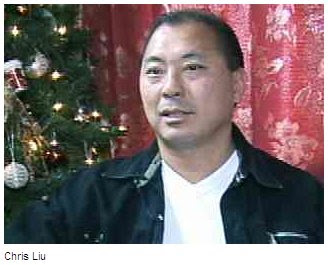 The airline pilot who lost his federally-issued gun and badge for posting video on YouTube critical of airport security has chosen to go public with his identity...

Liu's cell phone video tour of security at San Francisco International Airport led to a team of six federal agents and sheriff's deputies coming to his home on Dec. 2 to take his handgun and Federal Flight Deck Officer (FFDO) credentials... Liu's state-issued permit to carry a concealed weapon was also suspended by the Placer County sheriff.

...Liu decided to reveal his identity Monday because he wants to become actively involved in changing what he believes is a major flaw in airport security... As Liu pointed out in the video, pilots and flight crew are subjected to real-time TSA security screening while ground crew are not. "Upstairs they're going through the metal detectors and the X-ray machines, and downstairs they're swiping a card," he said...

Apparently, the oft-repeated domestic security phrase needs to be modified a bit for the Obama administration. Perhaps it should read: "If you see something, say something -- unless it embarrasses us."

This is a consistent theme for the Obama administration. In Governor Bobby Jindal's book ("Leadership and Crisis"), he described a White House concerned not with containing the damage from the BP oil spill, but instead worried about its image.

In an interview this morning on Glenn Beck’s radio show, Bobby Jindal said that at a meeting with the President during the gulf oil spill, that he and the President of Plaquemines Parish were told specifically by Obama not to go on TV and criticize him...

Jindal says that it was clear Obama was frustrated with the level of criticism he was getting and goes on to accuse Obama of caring more about perception and politics than actually cutting through the red tape and getting things done.

Try to contain your shock.

You may also remember that just a few months ago, former Clinton official Robert Shapiro stated that a successful terrorist attack may be just the ticket to restoring Obama's lost luster. Shapiro said, "he [Obama] is a leader who can command confidence and, short of a 9/11 event or an Oklahoma City bombing, I can’t think of how he could do that."

This administration is so far off the reservation it will take a massive landslide election in 2012 to begin the healing process. That is, if we don't suffer a catastrophic terror attack before then, assisted in part by a White House more concerned with image than security.

Butch Napolitano is a nutter.
As an American I would rather be responsible for my own safety on a plane or in my back yard. It would be better to be killed thus involved than to have her Chimps reach into my pants and feel my hair to tell me I am safe.
What in God's name has happened to individual freedom in this Country?