I would use the word "pond scum" to describe the crew that raped Detroit, but that would unfairly slur innocent and productive lake algae. 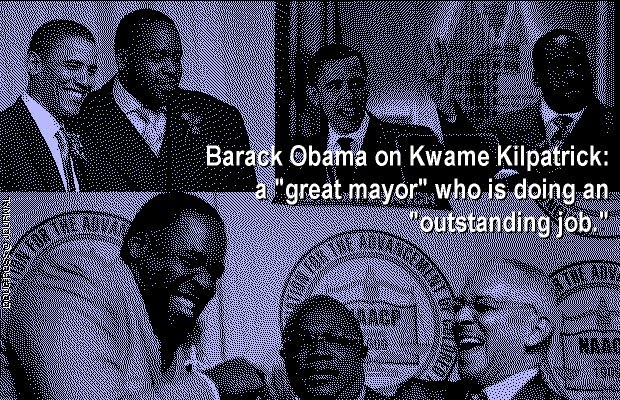 ...the Free-Press reported that prosecutors say Ferguson kicked back at least $424,000 in cash and other items of value to the mayor and that Kilpatrick used more than $590,000 in cash derived from the conspiracy to pay his credit card bills, purchase cashier’s checks and clothing and repay loans. Bernard Kilpatrick deposited more than $600,000 in cash into his personal bank accounts, and he was charged with filing false tax returns in 2004, 2005 and 2007.

The Detroit News described the depth of the sleaze with which Kilpatrick was involved.

[Ferguson and his companies had received at least $170 million in city contracts — $109 million from the Detroit Water and Sewerage Department alone — since Kwame Kilpatrick took office in 2002.

Barack Obama was one of Kilpatrick's staunchest political backers and friends. In 2007, during his presidential run, Obama called the crook "a great mayor" who was doing "an outstanding job" -- and he was "grateful to call him a friend."

If you can judge a man by his friends, Obama's choice of Kilpatrick speaks volumes. But, then again, it's not as if we needed more proof that Obama is in way, way over his head.

Hell, forget about the birth certificate: where are the freaking college transcripts?

"Hell, forget about the birth certificate: where are the freaking college transcripts?"

Maybe you could do a survey:

Which is the most likely explanation for the lack of Obama's college transcripts (and thesis)?

(Feel free to add other options)

I'd give anything to see his credit report...can you imagine what that would reveal?