Those blasts you hear in the distance: legacy media softening the ground for another Democrat "savior". 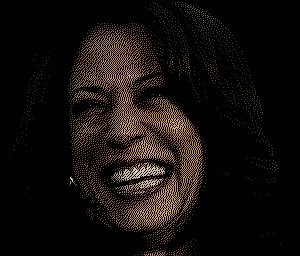 Politico: Kamala Harris: Democrats' anti-Palin
"...the future of the Democratic Party, a rising political star in the mold of one of her big supporters — President Barack Obama..."

USA Today: Ever heard of Kamala Harris? You will.
"...the woman the 2010 election cycle might eventually catapult to the greatest heights is one who barely made a blip on this nation's political radarscope. Her name is Kamala (pronounced COMMA-LA) Harris, and on Jan. 3 she'll become California's first female attorney general... Some people have called the 46-year-old Harris ... 'the female Barack Obama.'"

Los Angeles Times: The time may be right for Kamala Harris
"Kamala Harris, the state's next attorney general, last week announced a transition leadership team that was a marvel in its political heft: two former secretaries of State — of the country, not of California — and a host of other luminaries."

LA Weekly: Top 10 Hot Chicks In The News 2010: No. 2, Kamala Harris
"Kamala, please don't prosecute us, but we think you're kind of hot... California's new Attorney General -- and remember, we called it -- is a babe, and she's single, and she's smarter than you."

The Atlantic: 'Female Obama' Must First Tackle California
"...now that she's won a protracted vote-count for state attorney general, Harris is drawing national attention. And Democratic star-spotters are liking what they see... There have been the irresistible comparisons to Obama--he and Harris share youthfulness, multiracial backgrounds and starry-eyed progressive appeal..."

Hmmm... a committed Leftist with zero private sector experience, no legitimate executive background and is "historic" based upon some unique combination of racial demographics. Let me guess: she'll be the Democrat presidential candidate in 2016.

What is this, Groundhog Day?


Linked by: Michelle Malkin. Thanks!
at 6:57 PM
Email ThisBlogThis!Share to TwitterShare to FacebookShare to Pinterest
Labels: Democrats, MSM, Obama

n.b.: just send a quick note to the sports writer for the NYT and ask him who he likes for 2012. If he mentions this chick, the fix is in.

Kirstin Gilibrand is another one they're "grooming" to be "the face of the Democrat party." When she won the Senate seat, she was overweight, frumpy and looked like a typical mom. Now, she's lost a bunch of weight, has better highlights in her hair, obviously has a stylist for makeup and clothes, is in a fashion spread in a women's magazine (wearing D & G or Armani, as I recall), wears a LBD (while playing with her young sons) and was the "lead dog" on the 9/11 first responders bill which gave her more face time in the media than she's had. The Democrats are working overtime to find "pretty women" to counter Palin, Bachmann, Haley, Cheney, etc. An interesting battle will ensue- you really can't fool women with other women, we see through the b.s. with our own gender.

Just don't mention that she doesn't believe in enforcing immigration law, deportations, the death penalty, and she believes in giving gang banger illegals "a second chance" so they can (and did) go out and kill a father and his daughter.

Sounds like the perfect "progressive" candidate - no morals, refuses to live up to the oath of office, despises national sovereignty.

Funny, I noticed this myself. These liberals are so funny how the collectively work on things.