Remember All Those Banks That TARP Rescued? Looks Like Their Exposure to the European Debt Crisis Is No Prob--RUN AWAY!! RUN AWAY!!

As if U.S. banks didn't have enough troubles, we discover this delightful news out of the Bank of International Settlements (BIS).

Last night, the BIS released its latest quarterly review, as always chock full of useful information. The one major item that caught our eye was the updated exposure toward the PIIGS [Portugal, Ireland, Italy, Greece, Spain] countries by various foreign banks. And specifically the brand new category that had never been disclosed before by the BIS, namely the "other exposures" category, which per a rather closeted footnote is defined as: "other exposures consist of the positive market value of derivative contracts, guarantees extended and credit commitments." This is exposure that appears for the first time in an official BIS document. And it is sizable: while total foreign claims stood at $2,281 billion, the newly disclosed category accounts for a whopping two thirds of a trillion: $668 billion... 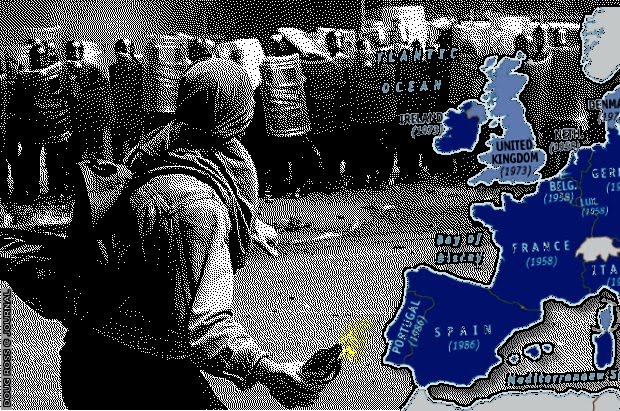 ...How generous of the BIS to share this data which as recently as 2 years ago may have been considered as material, and these days is merely dismissed with a laugh. After all who cares unless the potential loss has at least 12 zeroes in it. Yet what is most significant for the US taxpayer... is that US exposure to the P(I)IGS (Italy excluded, for the time being - give it a few months), has just tripled as a result of this revelation. While before it was "common knowledge" that US banks have nothing to lose should Europe go down the drain, it has now been revealed that US banks actually have $353 billion in exposure, of which $233 billion is of this newly revealed "other category."

And now that it is pro forma common knowledge that should the PIGS fails, that at least a few domestic banks would be wiped out, it also should be appreciated why the ECB will do everything to prevent an impairment to bondholders: with just under $2.3 trillion in potential partial or full losses on total exposure, the domino effect would blow up Europe overnight, then promptly wipe out the US and the rest of the world with it.

The country with biggest exposure to the PIGS is not surprisingly Germany with $513 billion, followed by France at $410 billion, Great Britain at $370 billion, and... the US at $353 billion... Here [is a pretty chart] that show[s] just how screwed Europe (and America) is: 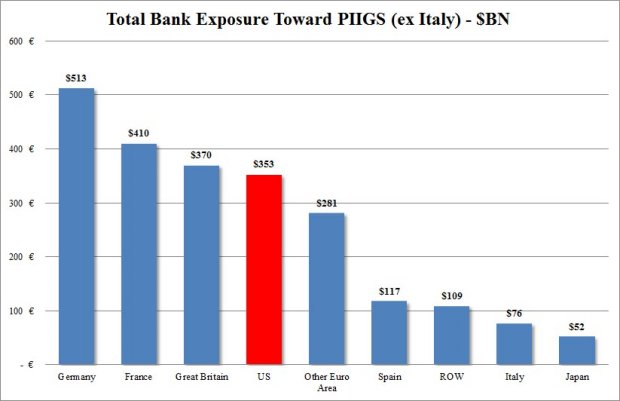 Just remember, folks: Tim Geithner is the only man smart enough to get us out of this mess.

Remember that "exposure" is not the same as "wipe out."

A big PIGS failure would produce lots of painful haircuts but not all of the exposure writes down to zero.