Former Alaska Governor Sarah Palin traveled to Haiti this weekend as a guest of the Rev. Franklin Graham and Samaritan's Purse to spotlight the ongoing humanitarian crisis in the earthquake and cholera-stricken Caribbean (half an) island nation. Instead she has found herself embroiled in a scandal, accused of bringing a hair stylist on the trip to make herself look good for the cameras and "photo-ops.".

The Associated Press transmitted a photo from Haiti of Palin captioned, "Former Alaska Gov. Sarah Palin, center, has her hair done during a visit to a cholera treatment center set up by the NGO Samaritan's Purse in Cabaret, Haiti, Saturday Dec. 11, 2010. Palin arrived Saturday in Haiti as part of a brief humanitarian mission. Dieu Nalio Chery / AP" 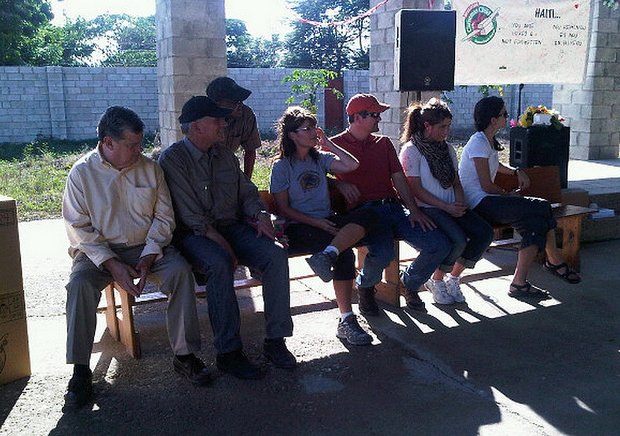 That photo and caption set off rabid attacks on Palin from the Huffington Post, the U.K.'s Daily Mail and, of course, Palingates.

The photo does indeed show Sarah Palin standing with her husband Todd as a woman whose face is obscured uses two hands to fix the hair on the right side of Palin's head.

However, one can observe that the woman is white, with her brown hair pulled back in a ponytail, wearing a white shirt with a bulky scarf and dark pants.

In other photos from Saturday, Todd and Sarah Palin's white, brunette, eldest daughter Bristol, who accompanied her parents on the trip to Haiti, is wearing the exact same clothing and ponytail as the "hair stylist" in the AP photo.

That's right, what the Palin-hating AP and others fail to report is that the "hair stylist" is Bristol Palin. [The Palins and the Grahams in Haiti ("hair stylist" Bristol second from right) in photo above]

The AP photographer who sent the caption would have known that it was Bristol Palin, but by not mentioning her the AP was able to do a media hit on Palin but still be able to claim they told the "truth" with the caption.

Palin "has her hair done": 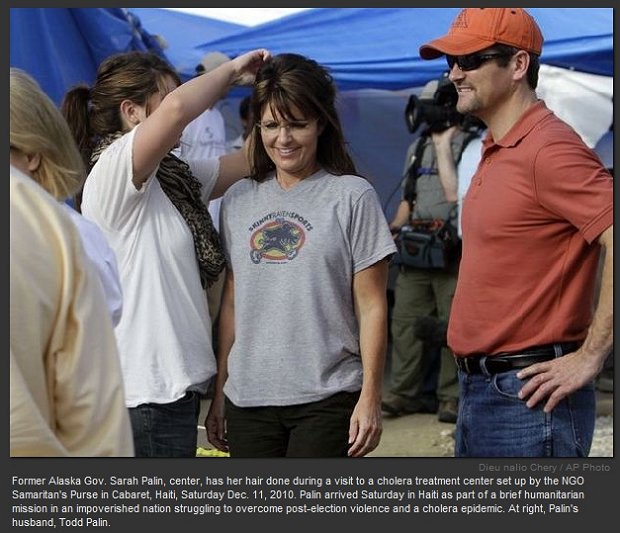 Photos via Palingates
The Daily Mail titled their story based on the AP photo and caption, Ready for Her Close Up...Sarah Palin Lands in Haiti (where they don't care what her hair looks like)

The Huffington Post titled their attack on Palin, Reading the Pictures: Palin Does Haiti Cholera: How's My Hair (and did AP lend a curl?). The AP reference in the headline is based on speculation in the article about whether the AP ran "scathing photo op-defying pictures of "the Sarah show?""

To reiterate, a daughter helps fix a loose strand of her mother's hair, and it becomes an international scandal. Amazing.

James Lewis is right: for some reason, the idea of President Sarah Palin terrifies the Left. Which is why I grow more comfortable with the idea by the day.

Typical. Even if it were the case that Palin brought along a personal hair stylist - so what? This does not seem to be a taxpayer funded trip, so why do we care who she pays to have come with her? Furthermore, why have these liberal weenies not crowed about the gaggle of people Shelly totes around with her - on OUR dime?

So have these deranged lying sacks of crap retracted their vitriol and issued apologies yet? if the AP wants to have any semblance of credibility they will fire the jerk responsible for this ridiculousness, and issue a retraction and apology.

"if the AP wants to have any semblance of credibility"

Looks more like she is getting a tick check. ;)

Stupid AP, proving how worthless they are, day by day.

It is a delusional leftist Democratic Partisan folly.

Yet, the hype about the Palins is so overplayed on Our side, I could really care less about it.

No doubt, I will be happy to defend Mrs. Palin against the nuts, but I really have grown so tired of the Celebrity fan fare - which has grown so utterly non-conservative.

Seriously, that Delaware selection hurt us, and the Miller flop was just as embarrassing. So was the Maverick Platform which Mrs. Palin embraced, and I even wonder sometimes why Bristol isn't spending more time taking care of her own child - or seeking further education or something.

I mean I have watched that Reality tv thing, and I do see a very sincere lack of substance.

Just growing tired of it all.

Stupid post, it was her daughter, Bristol, fixing her hair. Your so self-righteous you can't even get your facts right. is their anyone you respect or at least give a break too? Sarah is going to make a great president, we, the true Republicans, will get her elected!