Q: If you're the Democrat Governor of a Blue State With a $15 Billion Budget Deficit, What Do You Do? A: Borrow More Money!

Does anyone else think of the phrase "death spiral" when they read a story like this? 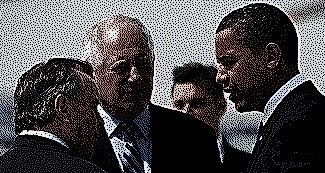 Illinois' borrowing spree would continue into 2011 under a plan Governor Pat Quinn is floating to sell more debt to deal with a huge unpaid bill backlog and pension payments... The state's lack of cash could lead to a $15 billion deficit that would include $8 billion of unpaid bills heading into fiscal 2012, which begins July 1, the state comptroller has warned.

...The state is betting on a good reception in the $2.8 trillion municipal bond market to borrow as much as $15 billion next year because debt service payments are a top priority... Illinois was the biggest single issuer of municipal debt, at $8.67 billion, in the first three quarters of 2010, according to Thomson Reuters data.

But the state's cascading bond ratings and well-publicized cash woes are raising some concerns... Bill Gross, who invested $5.5 million of his own money in five municipal bond funds run by his Pacific Investment Management Co earlier this month, told CNBC on Tuesday he would avoid Illinois debt...

The cost for a bondholder to insure against a default by Illinois has more than doubled in less than a year.

The collapse of the welfare-slash-open borders economy will be felt first in reckless, "progressive" Blue States like Illinois, New York and California.

And if someone comes to me floating a federal bailout for these states, I have but a two-word response. The second word is "you". The first word is not printable in a family blog. And "Hellz, no" works almost as well.