Two stories, separated by a decade, brought to us courtesy of Matt Drudge: 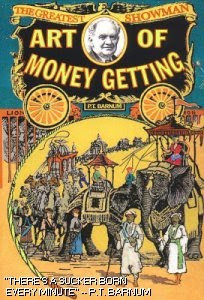 Snowfalls are now just a thing of the past

Britain's winter ends tomorrow with further indications of a striking environmental change: snow is starting to disappear from our lives... [Sleds], snowmen, snowballs ... are all a rapidly diminishing part of Britain's culture, as warmer winters - which scientists are attributing to global climate change - produce not only fewer white Christmases, but fewer white Januaries and Februaries.

...Global warming, the heating of the atmosphere by increased amounts of industrial gases, is now accepted as a reality by the international community... Eight of the 10 hottest years on record occurred in the Nineties.

However, the warming is so far manifesting itself more in winters which are less cold than in much hotter summers. According to Dr David Viner, a senior research scientist at the climatic research unit (CRU) of the University of East Anglia, within a few years winter snowfall will become "a very rare and exciting event... Children just aren't going to know what snow is," he said. 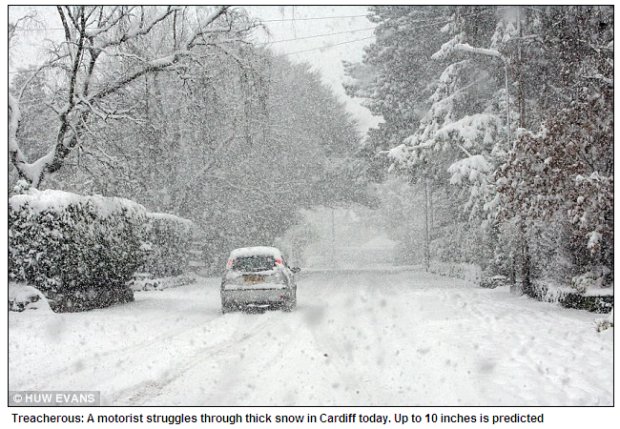 • Millions begin the big Christmas and New Year getaway early as the AA urged motorists to beware of the ‘worst driving conditions imaginable’
• Quarter of train services disrupted, travel warning in Kent
• Experts warn of a backlog of up to 4 million of parcels which could remain undelivered this Christmas
• The NHS issues an urgent appeal for blood donors as concerns grow over shortages
• Councils reveal plans to share grit amid fears the cold snap could last until January 14 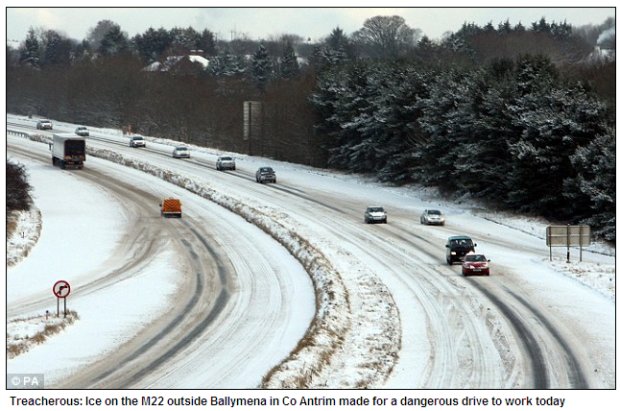 Swathes of Britain skidded to a halt today as the big freeze returned - grounding flights, closing rail links and leaving traffic at a standstill... tonight the nation was braced for another 10in of snow and yet more sub-zero temperatures - with no let-up in the bitterly cold weather for at least a month, forecasters have warned. 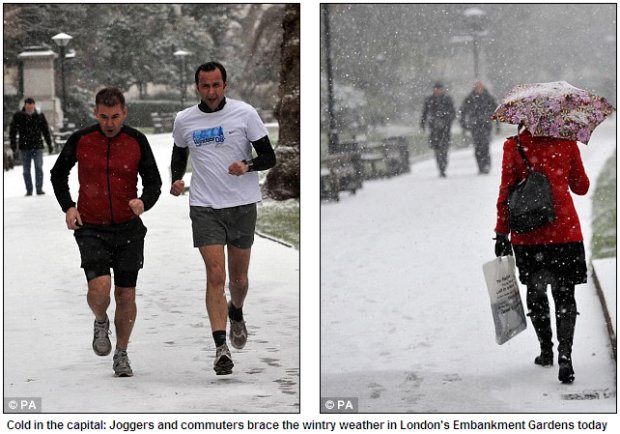 The Arctic conditions are set to last through the Christmas and New Year bank holidays and beyond and as temperatures plummeted to -10c (14f) the Met Office said this December was ‘almost certain’ to become the coldest since records began in 1910...

Not to worry, folks. Remember, any hot spells are to be treated as concrete proof of global warming.

But when there's a brutal and record-setting cold snap, perhaps even -- as some scientists believe -- an imminent ice age, that's just weather. It should not be considered evidence that global warming is one of the greatest criminal scams since Charles Ponzi.

Prediction: once we give the "scientists" a few more 'specially located' temperature stations, the AP will be declaring December 2010 the warmest on record in no time flat.

"Not to worry, folks. Remember, any hot spells are to be treated as concrete proof of global warming."

And cold spells, too!

Doug,as you know I've been living over in Ireland since George Bush made the planet safer for Americans and this is the second year in a row where we've had freezing temps and snow and ice on the roads. This year a slight dusting of snow has frozen and turned to ice on all the roadways making them dangerous to drive on resulting in several deaths due to road accidents.
The Irish nanny state is incapable of clearing the roads of ice and making them safe to drive on. I'm not sure what they spent the money on but it sure wasn't road salt.

Hey, they're driving on the wrong side of the road! No wonder a little snowfall caused so much trouble!

same on the mainland. Cities sold their snowplows and salting machines which were no longer needed because of "global warming" and (at least in some cases) used the money gained to buy tropical plants for their parks (which of course promptly froze to death the next winter).