Stark Naked Proof: Unemployment Benefits Must Be Time-Boxed. At Least, That's the Claim of the Teabaggers at The New York Times

Even the Gray Lady can't hide the fact that 2 + 2 equals 4. At least, not yet. Nan G, a commenter at Flopping Aces, observes:

Have you ever seen a chart [illustrating] when people find work in comparison to when their benefits run out? Here’s one such chart: 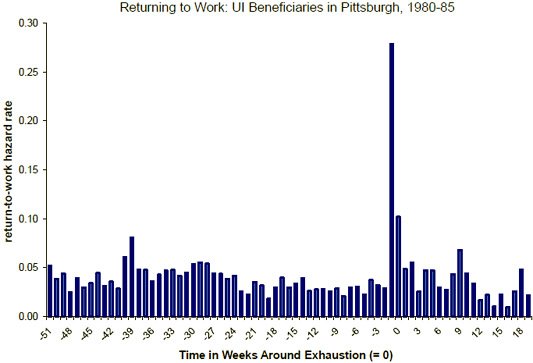 For example, a “hazard” value of “0.04″ for week “-14″ means that, among unemployed persons with 14 weeks remaining until their benefit exhaustion date, 4 percent of them either began working a new job or returned to their previous job.

Notice the VAST majority of unemployed persons got employed during their last week of benefits and the 1st week AFTER benefits ran out.

The rest of the NYTimes story (from [March] 2010) about this chart is here: http://tinyurl.com/TheNewYorkTimesSucks*. And it is worth a read.

Because it isn't often you see the Leftist crackpots at the Times printing the truth.