The film-maker Leni Riefenstahl died in 2003 at the age of 101. Her most famous motion picture was Triumph des Willens (Triumph of the Will), which was filmed at the 1934 Nuremberg Congress of the Nazi Party. By many accounts it is considered a masterpiece of political propaganda and it helped solidify a long friendship between the film-maker and the Führer.

In 2007 director Michael Moore released Sicko, a film that ostensibly compared the free market health care system of the United States with the universal approaches employed by countries such as the United Kingdom and Cuba. It depicted their government-run systems as vastly superior to the U.S. system.

On December 17, 2010, The Guardian reported a WikiLeaks revelation directly linked to Sicko: Cuba's government had banned the movie. 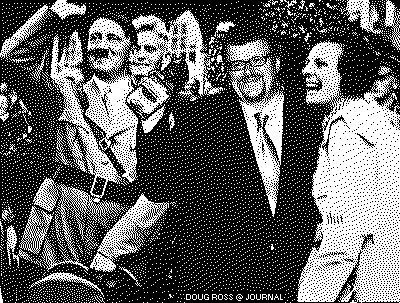 Cuba banned Michael Moore's 2007 documentary, Sicko, because it painted such a "mythically" favourable picture of Cuba's healthcare system that the authorities feared it could lead to a "popular backlash", according to US diplomats in Havana.

...The revelation, contained in a confidential US embassy cable released by WikiLeaks , is surprising, given that the film attempted to discredit the US healthcare system by highlighting what it claimed was the excellence of the Cuban system.

But the memo reveals that when the film was shown to a group of Cuban doctors, some became so "disturbed at the blatant misrepresentation of healthcare in Cuba that they left the room".

Castro's government apparently went on to ban the film because, the leaked cable claims, it "knows the film is a myth and does not want to risk a popular backlash by showing to Cubans facilities that are clearly not available to the vast majority of them."

This revelation should confirm to even the most obtuse observer that Moore is an unvarnished propagandist. His latest fictions were sufficiently outrageous that even Cuba banned them.

Michael Moore would have fit beautifully in the Third Reich, either as an assistant to Riefenstahl or as a stunt-double for the corpulent Hermann Göring.

at 10:38 AM
Email ThisBlogThis!Share to TwitterShare to FacebookShare to Pinterest
Labels: Democrats, extremism, Healthcare, Moore, World

What is it about conservative and stupid historical references? I am not fond of Moore by any means..but equating him to Riefenstahl? Goring?
The writer must be smoking crack with Michelle Malkin. Pablum like this makes Doug Ross to be more of a putz than Michael Moore...and that is saying a lot.

The Riefenstahl comment is totally appropriate, given that Moore is a committed propagandist...