Inevitable Failure of Eurozone Watch: Ireland nationalizes yet another bank in move to 'staunch panicked run on savings'

In a move aimed to contain a country-wide run on banks, Ireland has nationalized a fourth bank with its takeover of Allied Irish. 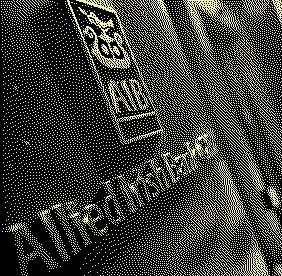 Ireland has nationalised its fourth troubled financial institution after taking control of Allied Irish Banks (AIB) today in an attempt to stem the run on deposits at the stricken bank... In the latest sign of the lack of confidence in the Irish banking system, Ireland's government secured a high court order to inject €3.7bn (£3.15bn) of funds into the bank through the nation's pension fund.

As Ireland was shoring up its banking system, problems inside the eurozone worsened after Fitch downgraded Portugal, the country that many market experts believe will follow Ireland in taking financial aid from its EU partners and the International Monetary Fund...

...AIB is joining Anglo Irish, Irish Nationwide Building Society and EBS building society in being taken into state control. Irish Life is the only lender so far to avoid a bailout.

Several days ago, Guggenheim Partners' Chief Investment Officer Scott Minerd issued a report that all but predicts a meltdown of the Eurozone (PDF, via Tyler Durden):

Much of the shakeout in Europe is likely to occur in the next 12 months, but the chronology and rapidity of how the crisis will fully unfold is less clear. One thing I believe with certainty, however, is that the tenuous situation in Europe will eventually unravel to the extent that the only solution will be quantitative easing and ultimately some form of federalization of Europe... 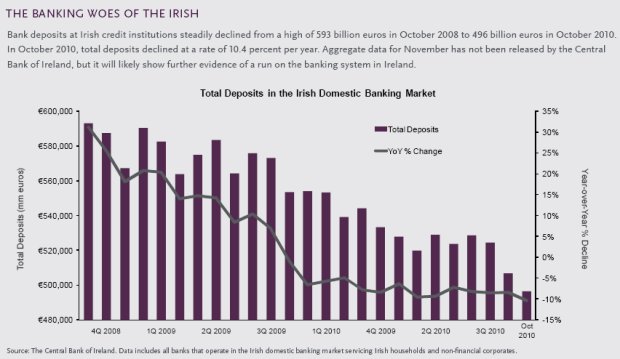 ...To help explain why I believe a broader financial crisis is coming to Europe, let me start with a quick story. Imagine for a moment that you’re an Irish citizen. Needless to say, you have many concerns about your country’s economic situation. The unemployment rate is 13.7 percent and climbing, your economy continues to contract, your nation’s debt-to-GDP ratio is 97 percent and rising (up from 44 percent just two years ago), your national deficit has ballooned to a whopping 30 percent of GDP, your government is caught in a debt trap, and its borrowing costs have increased 75 percent year-to-date. If expressed in current market rates, the interest payments on your government’s debt obligations could easily account for 7 percent of GDP, or roughly one third of annual tax revenues. To put this into perspective, the situation facing the Irish government is akin to waking up everyday only to realize that one-third of your salary is gone before you even think about paying for the necessities of life...

...The entire domestic Irish banking system has essentially failed, but the government wants you to believe that everything is fine. After all, the International Monetary Fund, the European Central Bank, and the European Union member countries have cobbled together an 85 billion-euro rescue package of which approximately 35 billion euros is set aside for the banking system... 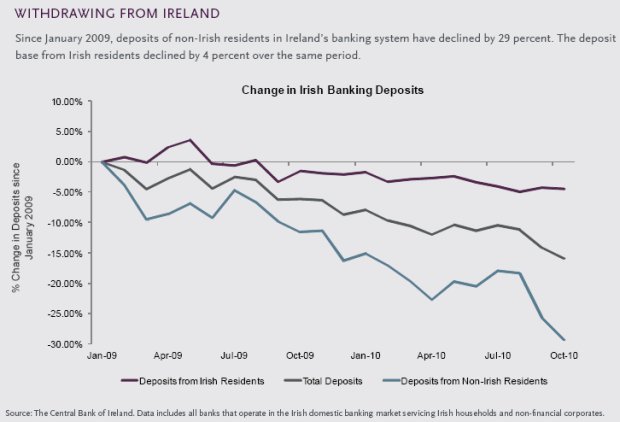 ...you get a hold of the Central Bank of Ireland’s most recent Credit, Money, and Banking report (publicly available on the internet). You see that total deposits for Ireland’s dwindling base of domestic credit institutions were roughly 496 billion euros as of October 2010. Some quick math tells you that this is more than three times Ireland’s GDP, and 14 times the scope of the current banking system bailout package. You start to wonder, “If I try to get my money from the bank at the same time everyone else does, where is the government going to get the euros to pay everyone?” You can’t think of an answer. Then you start to feel silly. “Why am I even bothering with all this worry?” you ask yourself. “I’ll just go down to the bank and take my money out now before things get worse. I can give it to a multi-national bank and sleep better at night.” ...It seems trite, but this little scenario is essentially what’s happening today. The Irish banking system is literally experiencing a run on its banks...

...Year-over-year, deposits declined 10.5 percent, and foreign investors are pulling their money out at an even faster rate of just over 20 percent per year. If the October data was that brutal, I cringe at the thought of what the November and December numbers may reveal. Even more disconcerting, domestic deposits have begun to contract. It’s one thing for foreign depositors to lose confidence, but now even the domestic deposit base is losing faith... Facing facts like these, each morning when I wake up I have to wonder, “Why is today not a good day for a wholesale run on the Irish banking system?” And if there is a wholesale run on the Irish banking system, then what stops the same scenario from cascading into Portugal, Greece, Italy, and most importantly, Spain?

It's a matter of when, not if.

Europe's Social Democrat welfare state is in the process of collapsing before our very eyes.

Yet the Obama Democrat blueprint -- from industrial policy to health care -- is precisely that of Europe's failing model.

Which says a great deal both about Barack Obama and the Democrat Party.

at 10:38 AM
Email ThisBlogThis!Share to TwitterShare to FacebookShare to Pinterest
Labels: Economy, World