DHS head Janet Napolitano is at the top of her game.

True, she refuses to secure the border. And, yes, she does slam the media for reporting on the outrage following the murder of a Border Patrol agent. Okay, it's true that she reportedly punished a pilot for pointing out huge, gaping holes in airport security.

But all that aside, it's clear that our beloved, baritone security chief has her heart in the right place.

Customs and Border Protection officers have been busy in the run-up to the holidays making sure counterfeit toys, some potentially dangerous, aren’t put under Christmas trees. 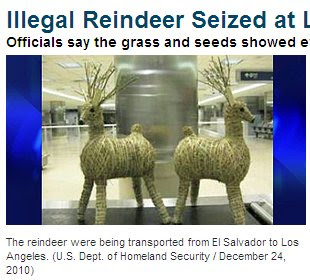 ...On Dec. 21, CBP said it seized an additional 13,843 counterfeit toys that violated intellectual property rights in the months leading up to the holiday season at the Otay Mesa cargo port of entry, near San Diego, CA.

But that's not all: federal officials also seized illegal decorative reindeer at LAX.

Federal officials have seized two decorative Christmas reindeer at Los Angeles International Airport... The owner, who brought the reindeer from El Salvador to LAX, did not have the proper certification to bring them into the U.S., customs officials said... Officials say agricultural specialists inspected the decorations and also found that the grass and seeds showed evidence of disease...

at 11:55 AM
Email ThisBlogThis!Share to TwitterShare to FacebookShare to Pinterest
Labels: Crime, Democrats, Holder, Immigration, Obama

I believe the Biblical admonition is "These things ye ought to have done but not left the other undone."

Anyone who does not experience utter revulsion at the thought of counterfeit Bratz dolls is not fully human. I'll be lucky if I ever sleep again.

This is the same administration that, in the days following the 1/4 million classified document dump by Wikileaks, thought the best use of the United States Attorney General was to send him to Zurich to shill for the World Cup to be brought here 8-12 years from now (they lost, it's going to Qatar & Russia).
They wouldn't know how to prioritize if American lives depended on it - which sadly, they do.

Meanwhile, back at the ranch, cousin Jethro, AKA Ali Rope Belt, received his shipment of mary jane and yellow cake, from the Mexican drug lords, five days early.

Cousin Jethro would like offer his thanks to the People's Republic of Obama for providing such great open borders and concentrating their forces on feeling up mean old grannies for the holidays.

He has offered that the assistance provided by team Obama helps to ensure that his healty crop of domestic mushroom clouds will soon become a reality.