Family of Slain Border Patrol Agent Rips Janet Napolitano and Barack Obama: "You Gotta Wake Your Man Up In The White House"

You most assuredly won't be seeing this story in The New York Times or on network news.

Jim Hoft points us to a heartbreaking KGUN Channel 9 interview with the family of slain Border Patrol agent Brian Terry.

Bag pipes and a somber procession with murdered border patrol agent Brian Terry's flag draped coffin; they're all the accoutrements for the funeral of a federal agent shot and killed while on patrol in Arizona's southern desert. 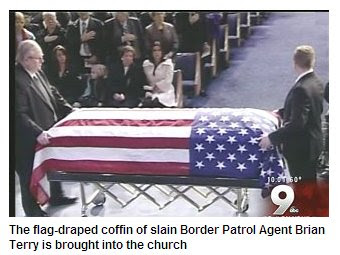 But, not so typical was what Brian's family had to say to KGUN9 the night before he was brought to his final resting place at Michigan Memorial Park. "I understand that Janet Napolitano called (Tuesday night). What did you say to her?" 9 On Your Side reporter Joel Waldman asked Brian Terry's father, Kent.

"'I said you gotta wake your man up in the White House,'" Kent responded. "And she said, ‘He's done more in the last two years than any other president.'"

But the Terrys told Waldman that they don't buy it. Kent, step mom Carolyn, mom Josie, older brother Kent Jr., sisters Kelly and Michelle are all angry that their son and brother, Brian, died the way he did. They're not shy about blaming President Obama's administration for not doing enough, taking aim directly at Secretary of Homeland Security Janet Napolitano. 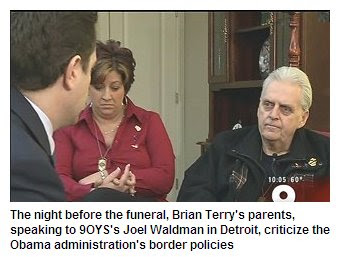 "She spoke with us and they were empty words today when she spoke," said step mom Carolyn Terry.

"They had no meaning to them. She'll have Christmas. She'll forget about it tomorrow."

...Local media were excluded from [Napolitano's] recent visit to southern Arizona, during which she discussed the Terry shooting with some local officials... Despite its response in sending more resources to the border, the White House has come under strong attack from those who believe the current administration is just not doing enough.

Members of the Terry family have now added their voice to those critics. Many of them tell KGUN9 News they will fight to make sure that their loved one did not die in vain.

What is so maddening about these terrible incidents is that President Obama and Secretary Napolitano appear more concerned with negative publicity than with the safety of U.S. law enforcement personnel. But, given their performances in the aftermath of the BP oil spill, that shouldn't really come as a surprise.

How hard is it to build a freaking security fence?

Apparently, too difficult for politicians in Washington, which is why we need to replace any and all Democrats in 2012.

I don't know which is bigger, the arrogance or the incompetence of this horrible administration.

The prez' job is to protect and defend our boarders. He has blood on his hands.

they have my vote,and the majority of Americas vote!

Obama has done more in the last 2 years to destroy US border security, the US economy, and national sovereignty than all other presidents before him combined.
Napolitana was quite correct...