Quite possibly the saddest photo I've ever seen. And the most damning.

For no other reason than spite, Barack Obama ordered the open-air World War II Memorial park closed and barricaded. In doing so, he intentionally shut the door on veterans visiting -- for perhaps the last time in their lives -- under the "Honor Flight" program.

Now, for those who aren't aware, this memorial is in an open-air park, it was paid for with private funds, and it is unattended. According to its website, it is open to the public 24 hours a day, 365 days a year.

That is, until the Obama administration doesn't get its way. That's when this kind of disgraceful idiocy occurs: 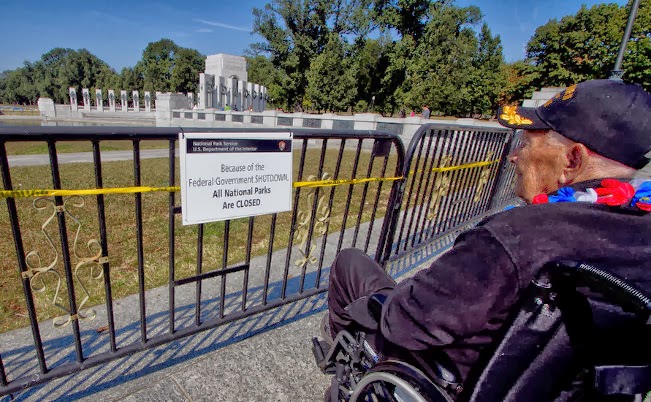 Again, out of pure spite, Barack Obama ordered the open-air memorial barricaded to prevent access. He also ordered the arrest of veterans entering the grounds.

How do I know Obama's actions were motivated by pure spite? Courtesy of John McCormack, here's the barricade around the World War I Memorial: 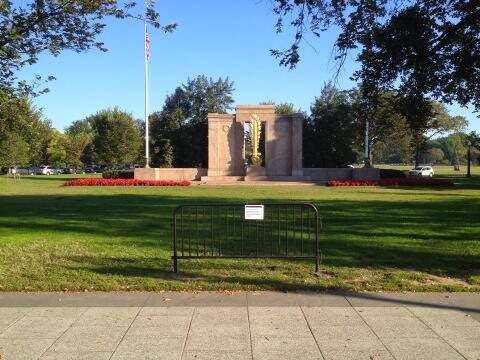 So we know as a matter of fact, not speculation, that the barricades were intended to spit in the faces of veterans visiting the Memorial for perhaps the first and last time in their lives.

Earlier today, Judicial Watch filed a Freedom of Information Act request to get to the bottom of this outrageous act on the part of an administration that is completely out of control. Governor Sarah Palin also called for civil disobedience.

This is why I liken Obama to a petulant six-year old throwing a temper tantrum when he doesn't get his own way.

Which reminds me that, a while back, I wrote about this kind of behavior in some detail in an article entitled: "FOREVER SIX: The Traits of a Narcissist".

Perhaps the truckers and bikers visiting D.C. over the next week and a half will drop by the Memorial to show their respect.

Are you high? You are blaming the shutdown of the government on Obama? There is just no end to the stupidity of the American people.

It's not idiocy. This President and the army of bureaucrats he has appointed hate this country. They shut down military monuments for the same reason they closed down Historic Williamsburg VA today and cancelled the army-navy football game. These are american symbols and they hate us.

It cost more to erect Barry-cades than to just leave it alone. So, no this is nothing about funding and everything about a small-minded, petulent child occupying the WH.

Beyond politically vindictive. This will backfire on the Feds for sure. Oh but maybe it was Bush's fault?

And there is no end to the stupidity of people like you who voted for Obama.