HEY: Anyone Seen the "Feminists"?

After attacking a village, the Islamic State splits women from men and executes boys and men aged 14 and over. The women and mothers are separated; girls are stripped, tested for virginity and examined for breast size and prettiness. 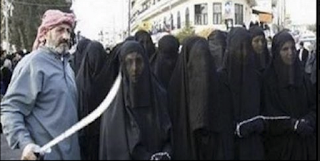 The youngest, and those considered the prettiest virgins fetch higher prices and are sent to Raqqa, the IS stronghold.

This is the revolting double standard of Western feminists, who are always ready to denounce the “homophobic” Christians, sexism on the US campus or the Israeli Ahava beauty creams.

There is a hierarchy: sheikhs get first choice, then emirs, then fighters. They often take three or four girls each and keep them for a month or so, until they grow tired of a girl, when she goes back to market. At slave auctions, buyers haggle fiercely, driving down prices by disparaging girls as flat-chested or unattractive. We heard about one girl who was traded 22 times, and another, who had escaped, told us that the sheikh who had captured her wrote his name on the back of her hand to show that she was his "property.’”
This is an excerpt from the testimony of Zainab Bangura, the UN representative for sexual crimes in war, who denounced the atrocities of the Islamic state...

...Even the corrupt United Nations has spoken, while the Western feminists keep silent. This is the revolting double standard of Western feminists, who are always ready to denounce the “homophobic” Christians, sexism on the US campus or the Israeli Ahava beauty creams.

These feminists have been busy the past few months fighting for the Irish referendum which just approved gay marriage, while treating as heretics, criminals and sexual predators all the brave opponents of this vote against the natural family. Feminists are also very busy in Israel in demonizing the traditional Orthodox Jewish families.

In the words of the feminist Rebecca Brink Vipond, “I won’t take the bait of a patronizing call for feminists to set aside their goals in America to address problems in Muslim theocracies”.

Yo, Giulio: don't be a buzzkill. What are a few thousand female slaves if "feminists" can courageously use "Mattress Girl" and "Binders Full of Women" to make a political point?