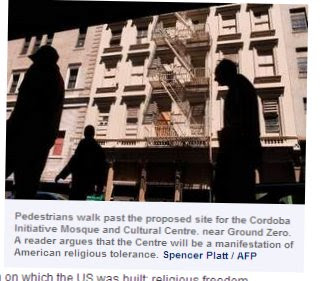 On a day when headlines shrieked news of the tragic and vicious murders of a US medical team in Afghanistan by Islamists, James Zogby decided to publish a defense of the Ground Zero mosque in a major Middle Eastern newspaper.

But, then, timing is often an issue for the apologists of Sharia since -- according to an official tally -- Islamists have been responsible for roughly 15,800 murders since 9/11.

Zogby's defense of the Ground Zero mosque is as dishonest as it is pathetic.

Having become a captive audience to the “clash of civilisations” rhetoric espoused by neo-conservatives and America’s Christian right, US Republicans have dug a deep hole for themselves concerning the Middle East and Islam.

Gee, James, and I thought the "clash of civilizations" rhetoric was coming from the Islamists? James Arlindson precisely described the goals of the Islamists using their own words. Among the highlights:

• Usama Bin Laden: "For [subordination to the Jews and occupation of Arabia] and other acts of aggression and injustice, we have declared jihad against the US, because in our religion it is our duty to make jihad so that God's word is the one exalted to the heights and so that we drive the Americans away from all Muslim countries."

• Mufti Madani: "... [T]he Muslims attained political power over all the others by waging Jihaad. They fought for Allaah’s pleasure and conquered nation after nation, including the superpowers of the Romans and the Persians... Even today the Muslims dominate large areas and will be able to dominate the rest if they unite, separate from the Kuffaar [Unbelievers] and wage Jihaad for Allah’s pleasure."

• Usama Bin Laden: "I am one of the servants of Allah. We do our duty of fighting for the sake of the religion of Allah. It is also our duty to send a call to all the people of the world to enjoy this great light and to embrace Islam and experience the happiness in Islam. Our primary mission is nothing but the furthering of this religion."

Funny, Zog, but Bin Laden and Madani don't strike me as neo-cons or members of the Christian right, you pathetic twerp.

Comments a few weeks back by the 2012 presidential aspirants Sarah Palin and Newt Gingrich, in opposition to the building of a mosque in New York City, are a case in point... Mike Huckabee, a leader of the religious right, has made disparaging comments about Muslims and is so bizarrely pro-Israel that he has stated “there’s really no such thing as a Palestinian”, while Mitt Romney, once the moderate governor of Massachusetts and now the darling of conservatives, has on more than one occasion suggested that the government wiretap mosques.

Zog, you've conveniently omitted one interesting factoid: the imam in question has endorsed the implementation of sharia law in the United States. By his own admission then, the brand of Islam he wishes to practice is not a religion -- it is a political system.

Zog, as you well know, Sharia law is a legal system unto itself that rejects the Constitution and the American form of government. Thus, there is absolutely no "separation of church and state" issue.

...They [the right wing] charged [Obama] with “moral equivalence” (meaning that he equated his concern with the Palestinians to the traditional American concern for Israelis)...

This Republican drift and the harshness of its anti-Arab and anti-Muslim rhetoric is worrisome. America’s engagement across the Middle East and South Asia is too important and the dangers too great for such virulence and misunderstanding to have taken hold in one of our political parties, especially when the GOP’s leaders appear so willing to vent their venom and use it for political advantage.

Recognizing reality is not venom. 3,000 souls were murdered by Islamists in the name of their religion on 11 September 2001. Tens of thousands of innocents have perished since then -- killed in beheadings, stonings, executions, hangings, beatings, floggings, suicide bombings and more. All were murdered in the name of a political system that adopts the guise of a religion.

Sharia law, Zog, is law. A political system. Even you should be honest enough to admit it.

Zogby's headline is Virulent anti-Middle East rhetoric grips the US right. I should have termed this response Virulent pro-Sharia rhetoric grips terror apologists, which is a good deal more accurate.


Hat tip: Memeorandum. Also see: Hey, ACLU: I want to file a zoning permit next to the Ground Zero mosque! Linked by: Michelle Malkin. Thanks!