"They're going to try to make you afraid of me. He's young and inexperienced and he's got a funny name. And did I mention... he couldn’t steer a tugboat let alone the ship of state?"

Gibbs, his colleagues, and the president cannot help themselves.

The White House is simmering with anger at criticism from liberals who say President Obama is more concerned with deal-making than ideological purity. 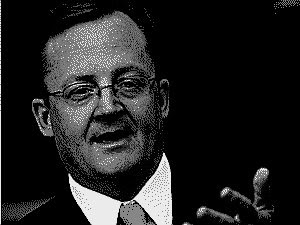 During an interview with The Hill in his West Wing office, White House press secretary Robert Gibbs blasted liberal naysayers, whom he said would never regard anything the president did as good enough.

“I hear these people saying he’s like George Bush. Those people ought to be drug tested,” Gibbs said. “I mean, it’s crazy.”

The press secretary dismissed the “professional left” in terms very similar to those used by their opponents on the ideological right, saying, “They will be satisfied when we have Canadian healthcare and we’ve eliminated the Pentagon. That’s not reality.”

Of those who complain that Obama caved to centrists on issues such as healthcare reform, Gibbs said: “They wouldn’t be satisfied if Dennis Kucinich was president.”

Gibbs goes on to say this:

...I’m not fan of the left — but it’s very unwise for President Obama’s notoriously prickly press secretary to publicly vent like this.

Among the many problems Democrats face going into the midterm election is the huge gap in voter intensity. (It favors Republicans by about a two-to-one margin.) Gibbs’ comments will only deflate the Democratic base. But Gibbs, his colleagues, and the president cannot help themselves. They are an extremely thin-skinned lot, prone to lash out at their critics. [Did I mention 'delusional'?] ...A fight with the base of the Democratic Party isn’t what Obama or Democratic candidates need right now. But thanks to Mr. Gibbs — who also succeeded in offending Speaker Pelosi recently — that’s just what they have.

Ruth Marcus says Gibbs is 100% accurate -- and that the left is deranged (but those of us on the right already knew that). Glenn Greenwald is on Gibbs' side as well, calling his opponents "the fringe losers of the left."

On the other hand Congressman and professional leftist kook Keith Ellison says Gibbs should resign. Nate Silver whines that the "White House is losing its cool". And the world's dumbest blogger thinks Gibbs needs to be drug-tested.

Uhm, yeah. That will happen.

You can always count on the Left to be the Left: insanely, endlessly hateful. I wondered where all the hate would go when Bush left office. Nature abhors a vaccum. Or, as David Solway says, a vaccum abhors nature. I shouldn't have wondered. Any student of the Left knows they cannot govern, and that the worst thing you can do to a Leftist is let him try. Unfortunately, it's also the worst thing you can do to everybody else. The horror of the next two years will be something to behold. Let's hope we can make it.