The Wife Was Really P.O.'ed This A.M. -- Chelsea's Wedding Extravaganza

The wife was on a roll this morning, pointing out some interesting facts about the immense Clinton wedding that took place this weekend. 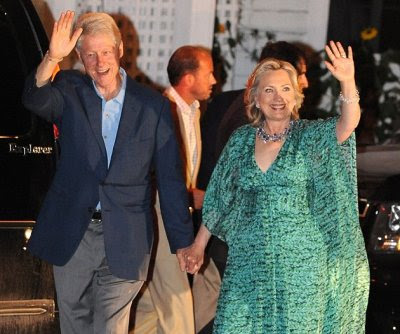 "This damn wedding cost between $2 million and $5 million." 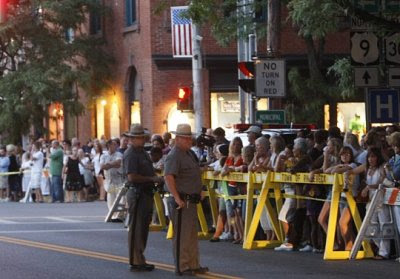 "They hold this wedding at the Astor Estate, with its porcelain bath fixtures, paying millions of dollars, and claim to be for the little people?" 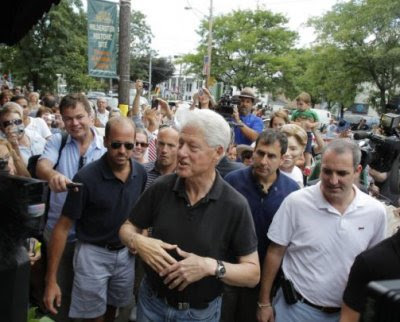 "Here's the spokesman (Clinton) for Haiti and he's blowing ten grand on a cake?" 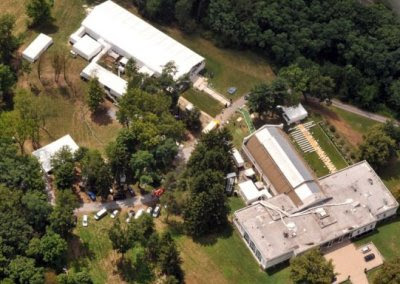 "And all of the liberals defending this extravaganza claim it stimulates the economy. Can you believe that? These are the same geniuses who tell us that trickle-down economics doesn't work!" 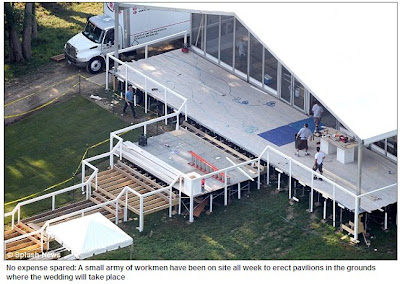 "Apparently Chelsea wanted a quiet little wedding. She's very publicity-shy. So why didn't they tone it down and donate the money to Haitian relief?" 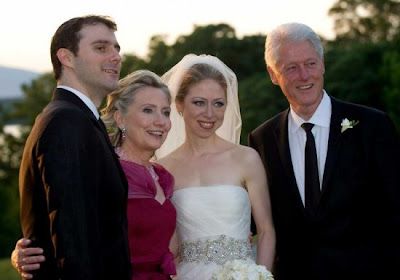 "But, no, they had to hold an over-the-top, massive celebration when the American economy is suffering." 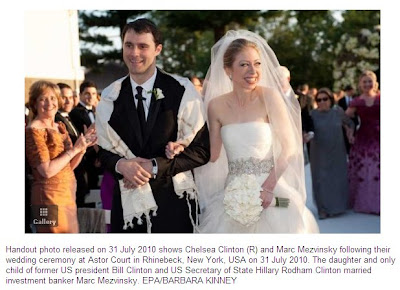 "There really are two Americas: the Democrat ruling class and everyone else." 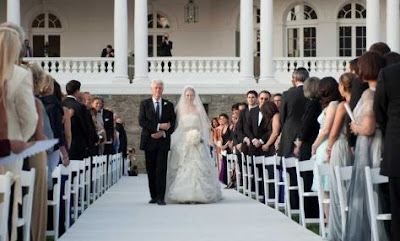 "These people are such f***ing hypocrites it makes me sick to my stomach." 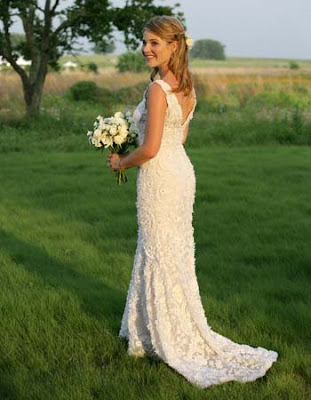 "And no one is pointing out a comparison to Jenna Bush's wedding." 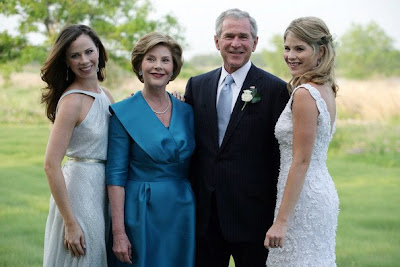 "She had a small, discrete ceremony in Crawford, Texas." 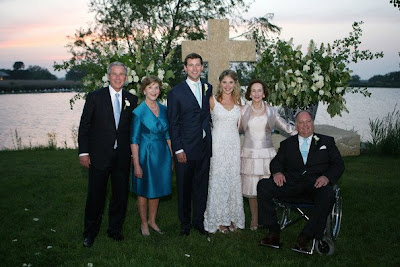 "Oh, but the Democrats are for the little people. They feel for the common man." 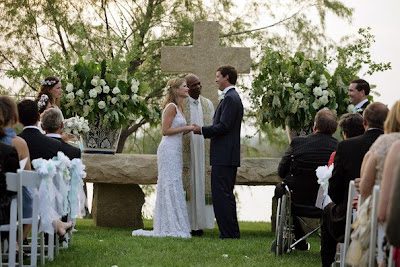 "It's like the difference between Al Gore's multiple mansions and George W. Bush's simple ranch that really is a 'green', environmentally friendly home." 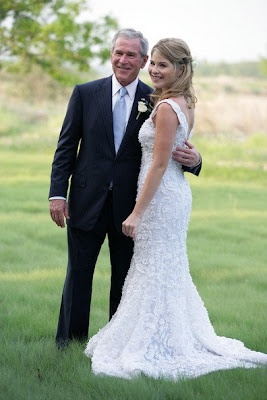 "And the media plays along, as usual. The American people know exactly what they would have done had Bush held this kind of shindig in an economy like this one."

"The media in this country suck."

Like I said, the wife was on a roll this morning. And she's right.


Related: There is a God!. Linked by: Michelle Malkin, iOwnTheWorld, Don Surber, Memeorandum, The Other McCain, American Power, So it goes in Shreveport, DaTechGuy and DBKP. Thanks!

at 10:47 AM
Email ThisBlogThis!Share to TwitterShare to FacebookShare to Pinterest
Labels: Democrats, Hillary, MSM

Jeez, I was reading the first sentence of this piece, and looking at that photo of Hellary in that blue tent, and the, uhhhhh, juxtaposition just jumped out:
"facts about the immense Clinton"

BTW, Doug, the GOP needs to fire Michael Steele and HIRE YOUR WIFE!!

The creepiest thing is the seventh picture where it says "Chelsea Clinton (R)". Ack!!

There is a bright side. Years from now, Obamandious will have to spend more--and do it twice--when his younlings get hitched. Michele will make him do it because she isn't going to be outdone by That Cracka.

Sheesh.
Sorry Doug, but your Mrs.'s remarks on this are that of a carp.
I can't stand the Clintons, but if they choose to burn their money in their patio chiminea - THAT'S THEIR BUSINESS.
Parents in this part of the world are allowed to be as lavish or as frugal on a daughter's wedding as they choose, whether or not some outraged, morally superior observer approves of it or not.
That might be another "roll" of hers you could've kept between the two of you. At least we don't have to listen to her as much as you clearly have to...

Mal: reading comprehension can be fun - give it a try sometime.

I believe the point at large is the media frothing over themselves at this lavish event juxtaposed to the media reaction had this been an equally lavish event thrown by a prominent Republican.

Read it again. You will be quizzed afterwords.

"The media in this country suck."

So do the unethical Clintons...

Same Couple who made it their policy to lie about the Genocide in Rwanda.

Peddled pardons to the likes of crack cocaine dealers, and the crook named Marc Rich.

Mal: Parents certainly can spent any amount of money they want, but they shouldn't pretend to be so concerned for the little people when spending an insane amount like $2 million.

Just to add a bit of importance...

There was this huge HOLE down on the tip of NYC, where the WTC used to stand.

Even after the first bombing of the WTC in 1993, the Clintons made it their focus to make the USA more vulnerable to attack, probably to protect their unethical Malfeasance from being investigated.

The Gorelick Wall, the Torricelli Intel Reform, turning down OSAMA, appeasing the Taliban, etc., etc., the Clintons made a mess of Our PEACE DIVIDEND after the Cold War.

We are still trying to deal with their gross incompetence, especially a NUKE POWERED NORTH KOREA.

But the Clintons, like Kerry, Kennedy, Pelosi, Reid, etc., never cared about the rest of the Nation, just their greedy selves.

Vast Right Wing Conspiracies and wagging the finger, all to deny the terrible offering in the 1990's, which enabled the very worst.

Even the Clinton "Bay of Pigs" in Somalia, helped inspire Bin Laden to go after the USA - believing we were just a "Paper Tiger".

So many Americans and Allies of the USA were being slaughtered throughout the 90's, while Bill and Hillary Clinton did nothing.

But sure enough, on the day he was to be Impeached, he bombed Iraq.

It is simply disgusting, to see these unethical crooks promoted like this in US Society - Media Today.

At least Chelsea appears to have some class. I suspect she may have been fine with a little ceremony in Crawford.

Nevertheless, it's their money and if they want a big-do wedding - fine. I'd rather they spend it here than in Haiti or in New Zealand on a yacht.

I suspect a lot of people got a paycheck this week woking on this extravaganza so, yes, the economy got a little stimulus.

Trying to use the Clinton wedding as political ammo is stupid... there's nothing good that can come from it.

Libs are hypocrites. That's a fact of life.

The Bushes had a "discreet" wedding because W. needed a place where he could get shitfaced drunk without anyone noticing.

Here's the problem with that line of thinking.

@Mal - Obviously you've never met the missus. Had you spouted that crap within earshot, she very well may have left you with a mouthful of bloody chiclets.

I suppose if you are a Socialist you'd be pissed off. If you were a Communist you'd be really mad. I'm a Capitalist, it's their money, they can spend it where they want. I think the wedding was tacky. That's no surprise. BTW, the Bush family is OLDE money, there isn't a need to flaunt it like the Noveau riche do.

Democrats: We put the 'Hip' in Hypocrite!

Odysseus is on to something.

I was going to comment: At least there was no mention of Lidsay Lohan.

While it's touching that "The Bad" and "directorblue" stepped up to defend Mrs. Ross' honor, it behooves me to point out that my comments were directed at her remarks about Mr. & Mrs Bubba's wedding expenses not at Mr. Ross' good lady wife personally. If you really "comprehend" what I wrote, that is.
My endangered chiclets notwithstanding, despite being in absolute agreement about how comprehensive the MSM's moral bankruptcy is and how the bastards would "review" a similar Republican event, I maintain that it is bad form to tell anybody how to spend their own money. Anybody. Even the always reprehensible Paul McCartney's monstrous ex had no business telling him how to spend his cash.
Criticizing how someone else spends their money strikes me as a "progressive" trait; and, as such, quite worthy of opprobrium.
So - bite me, kiddies.

Lucky Chelsea, she found a guy wiht absolutely no taste in women. Its almost as if she married her father. Then again, ugly women need lovin too, and its better he be crazy then drunk.
BTW, did anyone check the police logs this morning to see if an ambulance was called to the honeymoon suite to recover a chewed off arm by a seriously anemic guy with only a stump?

Whose money is that was pissed down the drain for the extravaganza? Please include such things as the expenses of the Secret Service, of shutting down the airspace, and so on.

Who is it that keeps telling me I need to cut back on extravagances like cooling my house so I can breath, of selling my paid-for cars and buy $41,000 cars that won't be useful for any thing much, none at all in the winter, and so on.

If the true answers to these questions and others are what I think they are, then "- THAT'S THEIR BUSINESS." is the stuff the pig lots around here are in trouble for.

Ah yes, the hallmark of intelligent discourse. Thanks for being you.

How's that 13 dollar stimulus check work n out 4 ya

@Mal - the missus is as beautiful as she is deadly, a brunette with hands of stone, trained in the dark arts of seduction and assassination, with her specialty being quite nerve-wracking for those unused to the concept:

She specializes in making it look like the victim died of natural causes.

Wow, your wife sounds like a bitter, envious bitch.

The nice thing about filtering on "anonymous" is that it gets rid of so much crap.

I could care less how much people choose to spend on a lavish wedding unless it's the SAME PEOPLE WHO WANT TO TAKE MORE MONEY FROM ME!!! It's pretty hypocritical for wealthy democrats to live lavishly while aggitating for higher taxes. I can't afford a big wedding because I pay high democrat taxes.

You have a wife?

Or is she like your girlfriend in Canada that no one has ever seen?

@TBogg - based upon the bills, she's all too real.

You talk as if the cash was sewed onto the train of the dress or baked into the cake, to be used up for the wedding and never seen again.

By next Monday, the caterers, the "small army of workmen" who built the stage, the drivers of all the rented limos and buses, the maids and counter staff at the local hotels, the pastry chefs who worked on the desserts you so despise will be spending the money they earned working on this wedding.
I'm a conservative and never voted for a Clinton. But I have no problem with their spending their money, lavishly even. And I'm willing to bet that all the folks who worked on this wedding will have little difficulty in figuring out how to spend the money they earned.

What about the Bush ranch in South America? And does anyone have the receipt for Jenna's cake? Pretty disingenuous article there Doug. Besides, if it were taxpayers footing the bill there might be some validity. But that's pretty arrogant to be telling people how they should be spending their own money.

"But that's pretty arrogant to be telling people how they should be spending their own money."


We can agree on that part.

Isn't it nice that the sum total of the history of the short Obama presidency will be what Bush did"?

@Mal: Of course people can spend their money any way they like. But it is UTTERLY classless to throw an over-the-top wedding like this, while sending out letters begging Hillary! supporters to help pay their campaign and legal fees. It is a perfect example of the tone-deaf Liberal elite.

What I find more sickening, is the misogyny from the leftists here. Don't like the article, so they attack the woman who wrtote it. Stay classy you folks.

Anybody who thinks the clinton thieves spent a penny of their own money for this party probably believes that bill was only having tea with monica and his other female victims.
emdfl

Red herring. I never told anybody they had to stop going to ballgamse, but that I could.