"Hey kid, you got a license to run dis bake sale?"

[The bill] adds another 115,000 children to subsidized school food programs, and adds a whole new class of entitled student, the school “dinner” student. This means the government in some schools will be serving low-income kids breakfast, lunch and dinner (take this a few years down the road and who needs parents? Just leave your kids at the warehouse.) 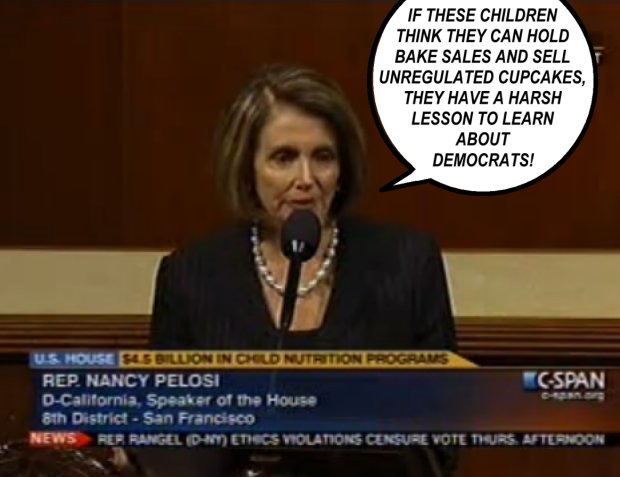 --“the legislation would apply to all foods sold in schools during regular class hours, including in the cafeteria line, vending machines and at fundraisers. It wouldn't apply to after-hours events or concession stands at sports events. Public health groups pushed for the language on fundraisers, which encourages the secretary of Agriculture to allow them only if they are infrequent.”

To be a member of the modern Democrat Party, you have to be exceedingly stupid. The voters just kicked the crap out of Democrats at every level of government for precisely this unconstitutional insanity.

And while they're regulating bake sales, the economy is trembling as taxes on every American are poised to increase. But the lame duck Democrats can't trifle with those minor concerns: vending machines are killing kids. Killing kids, I say!

The gov't was already encroaching on fundraising food sales with strings tied to Dept. of Agriculture "free or reduced lunch" subsidies. But of course, there's no such thing as too many laws criminalizing incorrect choice-making.