Photo: This is the whack-job who thinks you need to be medically "treated" for questioning the U.N. climate scam 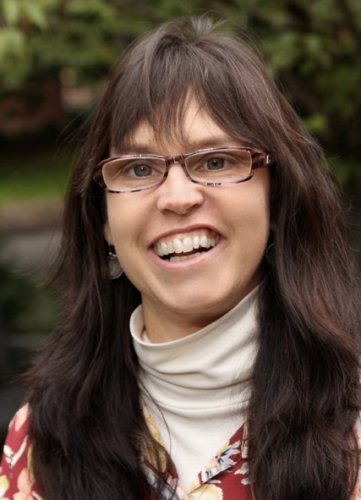 A whole slew of new “research” on conservatives’ and global warming skeptics’ “brains” has hit the academic circuit.

First off, environment and sociology Prof. Kari Norgaard’s [Ed: pictured at right] new study claims skeptics of man-made global warming fears should be “treated” for their skepticism. The study compares skepticism to man-made climate fears to the struggle against racism and slavery.

Prof. Norgaard’s concept of “treating” those who do not follow the current day’s political or social orthodoxy is, frighteningly, not new. A quick look at the 20th century totalitarian super states reveals many similar impulses.

It’s even more chilling that there is a whole new movement afoot by the promoters of man-made global warming theory to intimidate climate skeptics by using new brain “research.”

Other researchers have attempted to tie conservatism (which is identified with the highest number of climate skeptics) to “low brainpower.” ... Finally, still other climate activists have actually implied that we need to consider “human engineering” to combat global warming... NYU Prof. S. Matthew Liao of Center for Bioethics says his human engineering solution “involves the biomedical modification of humans to make them better at mitigating climate change'"

Sounds like the climate movement is pushing back against the numerous disclosures that have exposed "global warming" as nothing more than a money-making scam for NGOs and academics.

And it also would appear that they would like to use the same tactics the Nazis used to suppress opposition, all in pursuit of their totalitarian, anti-science vision.

Yet another reason to praise our country's founders for their wisdom vis a vis the Second Amendment.

at 11:07 AM
Email ThisBlogThis!Share to TwitterShare to FacebookShare to Pinterest
Labels: Climate, Democrats, extremism, Gore

Just ANOTHER psuedo-scientist that desperately needs high speed lead therapy.....or if that is unavailable slow speed hemprope therapy will do....

This just looks like another example of the Asymmetrical War on Women to me.

I love this quote by Seto:
"We certainly don’t want them (humans) strolling about the entire countryside. We want them to save land for nature by living closely [together],”

Surely there is a pointy head covered by hair lurking there. I'm guessing she prefers to date trees exclusively.

Kind of reminds me of a joke I heard many moons ago. Too bad I don't remember it, cause I think it was pretty funny. But the punch line was: '...so I gnawed my arm off so I wouldn't wake her'.

Is there such a thing as "Facial Realignment Surgery"?

You should have included some kind of warning with your link. That picture is just brutal.

All I could think of was the scene at the end of Star Trek where the aliens revealed what the cute blonde really looked like (sans mind control), that they had no idea what human females were supposed to look like.

In the Communist Russia anyone who didn't agree with Comminism would be declared insane and sent to a psychiatric hospital. The "logic" of the left is laughable but the results would be the same if they gain power.

That's a face for radio.