"A Complete Collapse of Reason"

Last November Pope Francis issued an exhortation entitled Evangelii Gaudium in which he made the following assertions about Islam:

In order to sustain dialogue with Islam, suitable training is essential for all involved, not only so that they can be solidly and joyfully grounded in their own identity, but so that they can also acknowledge the values of others, appreciate the concerns underlying their demands and shed light on shared beliefs. We Christians should embrace with affection and respect Muslim immigrants to our countries in the same way that we hope and ask to be received and respected in countries of Islamic tradition. I ask and I humbly entreat those countries to grant Christians freedom to worship and to practice their faith, in light of the freedom which followers of Islam enjoy in Western countries! Faced with disconcerting episodes of violent fundamentalism, our respect for true followers of Islam should lead us to avoid hateful generalisations, for authentic Islam and the proper reading of the Koran are opposed to every form of violence. 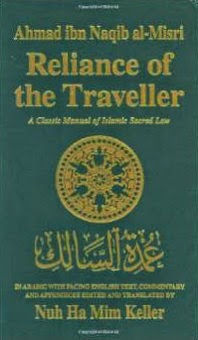 As has been reported here at length over the past couple of weeks (see the list of links at the bottom of this post), a Muslim imam was invited to participate in the “prayer for peace” event at the Vatican on June 8. The esteemed alumnus of Al-Azhar University went off-script, however, and asked Allah to help him gain victory over the unbelievers.

The Vatican at first denied that any such thing had happened, and an edited video of the event was released that supported their denial. However, as we reported last week, the end of Sura 2 Verse 286 from the Koran that the imam quoted — which had been judiciously removed from the publicized version — was most assuredly included in the cleric’s Arabic-language prayer.

To provide context for this momentous event, the following information is instructive. Regular readers should bear with me; I know you’ve seen this all before.

’Umdat al-salik wa ’uddat al-nasik, or The reliance of the traveller and tools of the worshipper is commonly referred to as Reliance of the Traveller when cited in English.

This an authoritative source on Sunni Islamic law, because it is certified as such by Al-Azhar University in Cairo. There is no higher authority on Sunni Islamic doctrine than Al-Azhar; it is the closest equivalent to the Vatican that can be found in Islam.

Consider this passage from Reliance of the Traveller, chapter O, o9.0:

Jihad means to wage war against non-Muslims, and is etymologically derived from the word mujahada, signifying warfare to establish the religion. And it is the lesser jihad.

The scriptural basis for jihad, prior to scholarly consensus is such Koranic verses as:

In o9.8, Reliance of the Traveller describes the objectives of jihad:

Keep all these sources in mind when you watch the following video.

Vlad Tepes has conducted a comprehensive interview with Maj. (ret.) Stephen Coughlin, who is one of the foremost non-Muslim American experts on Islamic law. Maj. Coughlin examines the context of what the imam’s prayer at the Vatican as it relates to Islamic law. He uses his explanatory material — from authoritative sources of Islamic law — to expose the strategy behind Muslim participation in the prayer event at the Vatican, and the Muslim Brotherhood’s exploitation of the “interfaith” movement to accomplish its own ends.

Many thanks to Vlad for recording, editing, and uploading this video (if you’re not familiar with it, see this subtitled version of the Arabic recitation referred to in Maj. Coughlin’s briefing):

Mr. Coughlin,
You are not "hateful" and you have not made any "generalizations." I--a strong, faithful catholic--- wish to sincerely thank you for taking the time to provide such thoughtful analysis, and to Doug Ross, for posting it. This Pontificate is causing far too much confusion! Your clarity & expertise in this matter is appreciated more than you could possibly know. God Bless!


I believe the Pope should solemnly and tactfully use all opportunities to question the attacks and murder of Christians by Muslims. This should be ongoing. Anything else is pointless and weak.

In years past Muslims might have pretended to go along with some kind of multi-faith arrangement but not any more. Also any Muslim who decides to participate would also be under attack unless it was understood by others to be a ruse, so what is the point.

How can a person who has risen to the position of Pope be so naive?