Today’s news tells us that Senator John McCain is going to be stumping for Thad Cochran in Mississippi, in his Senate primary runoff with State Senator Chris McDaniel. 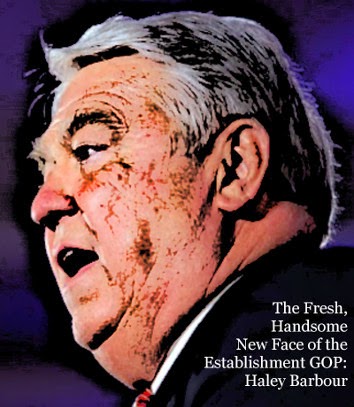 If put on a stage together, you could clearly see the status quo versus the remedy, the septuagenarians of spending versus the ferocious freedom-fighters, the impotent versus the potent, the problem versus the solution.

But few know the true back story on this race. It was Cochran who didn’t want to run, but was pushed to, by the Mississippi and DC elite. It was McDaniel who defied Barbour on his plans for Mississippi’s educators, and stood for Mississippi law. Barbour has it in for McDaniel, and has lied about him repeatedly to save the seat for a couple of years so that Barbour’s Mississippi machine could fill a vacancy. All they have to do is get past this runoff.

The Cochran campaign is using Democratic operatives to try to get Democrats to vote for him in the primary, a move that is, as I understand it, against Mississippi law. Barbour is working hand-in-hand as a lobbyist, with Democrat radicals to move forward on amnesty. It was Haley Barbour, who, in 2001, prior to becoming Governor, worked as a lobbyist for the Mexican government, even though he denied it, on issues, ‘including “immigration/human capital” and “treatment of Mexican citizens who cross the border,’” according to the LA Times.

Recently, Barbour has joined with new Democrat superstar mayor of San Antonio, Julian Castro to call for amnesty of illegal aliens. He has said that the people of Mississippi need chicken pluckers for the chicken processing plants, which are dirty places to work, apparently only suitable for Mexicans? A look at Delaware showed a clean plant with American workers, so is it Barbour’s view that the facilities in MS are there only to disallow clean, good paying jobs for American workers?

Not only did Barbour and the NRSC raise the issue of Katrina funds in the campaign, saying that McDaniel wouldn’t have allowed federal funds to Mississippians who needed it, a charge wholly unfounded, considering it is the waste of funds that offers the biggest problems after a disaster, he himself, with the aid of a certain Senator Cochran, received and diverted Mississippi Katrina funds for a port deal that has now gone to Louisiana. Sort of makes McDaniel’s point doesn’t it?

The emotional pleas to hang on to Cochran, a man who has been in Washington DC for 42 years, and rarely if ever speaks in the Senate, and probably for good reason for himself on the campaign trail, are gratuitous nods to the Barbour machine, to Barbour’s amnesty deals, to Barbour’s nephew’s political futures, and Barbour’s political future as a kingpin in the national GOP. In a state that just whittled down its abortion clinics to one, Barbour has had the audacity to come to my State of Michigan and demand the social issues take a back seat, caring not a whit about the souls of the unborn Michiganders for his political plans. That’s why, when Barbour talks about “purity” he’s talking about toning down the insistence of the good people of Mississippi to speak for the unborn who have no voice, the silent individual millions.

In a speech he gave here in Michigan, Barbour stressed that, “politics is about multiplication, not division.” But in his political world, he would divide his own fellow Mississippians in order to prop up a 42-year incumbent who will likely not serve his full term, just to keep his place in a GOP that has lost its soul.

What tradition is Barbour upholding with his strings on Cochran? With his neck-deep plunge for amnesty? With his inability to fight for the innocent and the founding of this great land? Let me suggest that the tradition Haley Barbour upholds is his own personal grip on the Republican Party, which, as witnessed by the grassroots in every State in this country, has eschewed support for the pro-life movement, and pro-family traditions that made this country great. The Republican Party must turn back to first principles and the tradition of liberty and individual rights, before we lose our grip on the America we once knew.

The lack of an interest in conservative traditions is what Barbour represents, and defeating Cochran, and his proxy, Barbour will go a long way to strengthening the once great, but now troubled political party who, with Barbour’s strong arm, would take us into many years of darkness and injustice.

Shake it up, Mississippi.

At this point, there's nothing more we need to know: the hacks of the GOP are about disloyal to our nation as the fascists running the democrat party is.

The Tea Party is we have. Embrace it as if the future of your nation depended on it.