When it comes to "fundamentally transforming America" -- candidate Obama's stated agenda -- I think we can officially hang the Mission Accomplished banner on the U.S.S. Refugee Crisis. 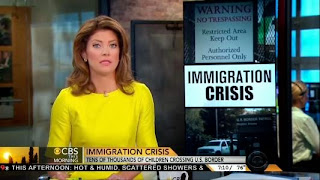 Late last week, detention centers along the U.S.-Mexican border were crushed with a new surge of unaccompanied illegal immigrant children, yet two of the Big Three networks have barely touched this new headache for the Obama administration. And not a single reporter or anchor on ABC, CBS or NBC have cited Barack Obama’s extension of the Deferred Action for Childhood Arrivals (DACA) as cause for a humanitarian crisis that has led to children as young as 9-years-old illegally crossing the border without their parents.

How many children have died, been subject to assault, and otherwise abused making the trek from Central America?

Curious how the progressives' old saw -- you know, "If we can only save one child!" -- is ignored completely when the deaths of countless kids helps advance their agenda. 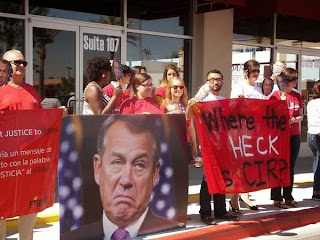 NBC’s Ned Potter, in a June 8 Nightly News story, painted a stark picture of children leading other children across the border. However, he never mentioned Obama’s extension of the Deferred Action for Childhood Arrivals (DACA) as a cause of this “humanitarian crisis.”

...Over on CBS Charlie Rose and Norah O’Donnell invited Republican Senator Marco Rubio to discuss the topic on the June 10 edition of CBS This Morning, but neither one of the co-anchors asked the Florida senator if Obama’s extension of the (DACA) was even partly to blame. Rose, however, did find time to push Rubio on immigration reform, as he pressed: “You got into some political pushback on immigration reform. When will we see thorough immigration reform?”

Even the Sacramento Bee lays the blame for an "international crisis of unaccompanied migrant children at U.S. border" on President Oprompter.

...a sudden surge – from 13,625 in 2012 to 24,668 last year – in children traveling north on their own. Homeland Security officials expect 90,000 unaccompanied minors to be detained by border patrol this year, maybe more. And those are just the kids caught; it doesn’t include the many stranded alone in Mexico’s dangerous border towns.

More likely, the migration is a result of ambivalent immigration policy that is sending mixed signals abroad. While the Obama administration has deported a record 2 million people, the administration has also extended a compassionate arm to undocumented children. It’s no surprise, then, that there’s a widespread belief in Central America that if kids can survive the treacherous journey and get across that border somehow, they will be allowed to stay.

These deaths, these injuries, this abuse of children -- not to mention the utter disregard of the American citizenry -- is on Barack Obama and the rest of the Democrat Party.