John Kerry came, saw and as usual made a horse ass out of himself.

Secretary of State John Kerry voiced strong U.S. support for Egypt's new president and signaled that Washington will continue the flow of military aid in an American welcome of the post-coup government.

Mr. Kerry said that the U.S. had recently released $575 million in assistance for Egypt's military and that he was confident 10 Apache helicopters would be delivered to Egypt soon.

"I am confident that we will be able to ultimately get the full amount of aid," Mr. Kerry said in his first stop on a regional tour focused largely on responding to the crisis in Iraq. "I am confident…that the Apaches will come and that they will come very, very soon." 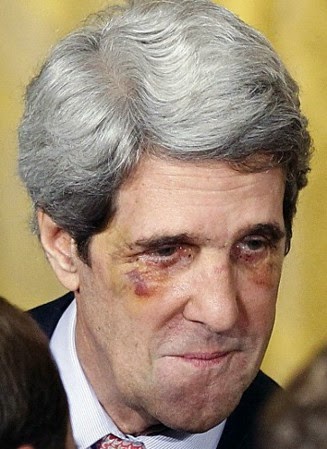 Then from this morning:

Three Al Jazeera journalists were sentenced to seven years in jail by an Egyptian judge on Monday for aiding a "terrorist organization", drawing criticism from Western governments who said the verdict undermined freedom of expression.

U.S. Secretary of State John Kerry said that he had phoned Egypt's Foreign Minister Sameh Shukri on Monday to register Washington's "serious displeasure" with the sentencing of three Al Jazeera journalists to seven years in jail.

"Today's conviction is obviously a chilling and draconian sentence," he told reporters in Baghdad.

"When I heard the verdict today I was so concerned about it, frankly, disappointed in it, that I immediately picked up the telephone and talked to the foreign minister of Egypt and registered our serious displeasure at this kind of verdict," he said.


So... Kerry immediately "picked up the phone and talked" to someone upon this latest public humiliation of the "top" US diplomat. Is it the same someone who will be signing the receipt on the delivery notice of the 10 US Apaches, and the confirmation of the $575 million inbound wire from the US Treasury?

Egypt's military-dominated government has delivered a humiliating, public slap in the face to John Kerry, the US secretary of state, by sentencing three al-Jazeera journalists to long prison terms only hours after Kerry personally expressed his deep concern about the case in high-level meetings in Cairo. The snub represents a disastrous beginning to Kerry's already fraught Middle East tour, which took him to Baghdad on Monday for crisis talks about the Islamist extremist uprising.

The verdict, by a court responsive to government wishes, will also be seen as a deliberate, crude signal to President Barack Obama, who criticised Egypt's deteriorating human rights record after the former general, Abdul Fattah al-Sisi, seized power in a coup last year. Sisi has since had himself voted president. His elected predecessor, Mohammed Morsi, and thousands of his Muslim Brotherhood supporters remain in jail while hundreds of others have been killed.

In what US officials said were "candid" talks with Sisi, Kerry "emphasised our strong support for upholding the universal rights and freedoms of all Egyptians, including freedom of expression, peaceful assembly and association". He noted a number of promises by Egyptian leaders "are yet to be fulfilled", but added that "the United States remains deeply committed to seeing Egypt succeed".

The hollowness of all this careful diplomatic language was exposed for all to see by the court's verdict, which diplomats and observers said was reached without the complication of supporting evidence. It seems clear now that Kerry was wasting his breath; the sentences were pre-determined, intended as a stark warning to Egyptian and foreign media and as a symbol of the regime's determination to demonstrate its independence of Washington.

This is ironic given that, before the talks, the US had made available most of the $575m (£328m) in military aid frozen by Congress after the coup against Morsi. Kerry offered more blandishments in the form of 10 Apache attack helicopters, which he said would be supplied to Egypt "very soon". This is exactly the sort of deadly air power that Iraq's government has pleaded for but has so far been denied by Obama.

Kerry must now be asking himself whether it was entirely sensible to offer such diplomatic, financial and military support to Sisi unconditionally before their meeting and before the court announced its verdict. This is not the way hard-headed, worldly-wise American secretaries of state, such as Henry Kissinger, George Shultz and James Baker, would have gone about it. All old Middle East hands, they would surely have driven a tougher bargain. On the other hand, they would all probably have placed America's and Israel's strategic interest in a strong, stable pro-western Egypt above human rights issues. Perhaps this is what Kerry has done, too.

Whatever his reasoning, Kerry's record in the region has been similarly uninspiring. He invested considerable personal prestige, time and effort in pursuing resumed peace negotiations between Israel and the Palestinians, to no avail. This failure was entirely predictable, given the personalities involved on both sides and the lack of new ideas.

As for US "foreign policy", just how many other ways can one describe a flaming, slow and increasingly faster-motion trainwreck?

Effete snobbery.
I'd bet the even the almonds in Teresa's martini jumped out of their glass.

Sorry, the Gruaniad does not sum anything up best.

I know which way I'm betting.

Your comment box wouldn't let me use doubleplusundead.com for some reason.

The International Community!!!!!!!! is more upset about the 180 Islamist terrorists, including many Muslim Brother terrorists, sentenced to death in Egypt.

If that ass says too much the prisoners might be shot while trying to escape, or they might decide to commit suicide. Not sure which would happen. Don't you get it? It was intended as a rebuke. They are pissed at the overthrow of Mubarak.