David Stockman, President Reagan's Office of Management and Budget from 1981 to 1985, has a great blog called Contra Corner. His latest column is a stunning riposte to the media's claim that the total number of jobs in the U.S. have finally returned to the pre-crash high.

Yes, the nonfarm payroll clocked in at 138.5 million jobs and thereby retraced for the first time the point at which it stood 77 months ago in December 2007. This predictably elicited another “milestone of progress” squeal from the mainstream media.

So you have to wonder. Did these people skip history class? Do they understand the vital idea of “context”? Are they so mesmerized by paint-by-the-numbers agit prop from Wall Street and Washington that they have come to mindlessly embrace the notion that any number that is better than the last “print” is all that it takes—regardless of composition, quality or longer-term trend? 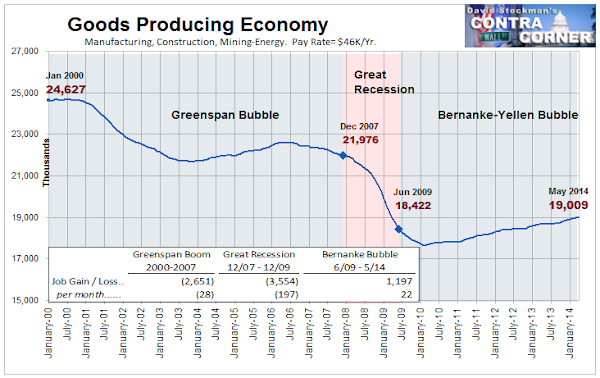 Thus, consider the ancient days of the Reagan era. Back then there were actually 15.0 million new jobs by the time that 77 months had elapsed after the June 1982 bottom. And these were honest-to-goodness new jobs that had never before existed, not born again jobs of the type that CNBC has made a “jobs Friday” fetish out of ever since the Great Recession was officially declared over in June 2009.

So if you want to try a little “context” absurdity recall this. So far we have created a trifling 100k “new” jobs since the last cyclical peak. During the equivalent 77 months in the Reagan era the US economy actually generated 150 times more jobs!

Stockman reinforces the age-old truism of TANSTAAFL ("There ain't no such thing as a free lunch") that anyone over the intellectual age of six inherently knows. Which excludes all Democrats.

6-years of ZIRP have left the world’s financial system booby-trapped with tottering pyramids of debt and rampant carry trades and financial speculations. Why would this be assumed to comprise the kind of stable and productive financial environment that would enable the current business cycle expansion to go on for years into the future, thereby eclipsing every record from far more stable times of decades past?

So a 77 month jobs drought is a big deal, yet search the financial press and you will find no mention. And not just because of the benchmark set in the Reagan era. During the 77 months after the 1990 peak nearly 10 million net jobs were created; the working age population expanded by 12.2 million; and the conversion rate was not zero, as during the recent go round, but actually more than 80%.

In a nutshell, Reagan's recovery was 150 times more powerful than Obama's. Which we kinda knew in our heart of hearts, but now we have actual confirmation.

They say that rats feel remorse, I doubt it, the rodents don't either. They also hate facts. The first is a splendid link about Reagan from the time when Dan had a bake sale, and Chuck Colson spoke about the barbarians at our gates.