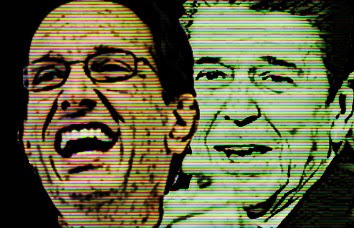 The editorialists positively swoon over Cantor’s climb up the House ladder. The seven-term congressman’s ascension to majority leader proves his “enduring” leadership, they opine.

Fact is, Cantor increasingly rankles his constituents in the 7th Congressional District, arguably the most conservative in Virginia. A Daily Caller poll shows Cantor struggling unexpectedly against challenger Dave Brat.

Voters are restless about Cantor’s zig-zag politics on immigration. They are uneasy about his coziness with Wall Street, and his role in the multibillion-dollar taxpayer bailouts of banks deemed “too big to fail.”

In his latest pivot, Cantor says he’s ready to work with President Barack Obama to grant amnesty to illegal immigrants. It’s for “the kids,” he says.

Compared to Pelosi and Reid, Cantor’s brand of pragmatic politics has become indistinguishable, and undistinguished.

Brat, a Randolph-Macon College economics professor and tea party favorite, says likening “Cantor to Reagan’s optimism and positive force is an insult to one of the greatest men or our era.”

Cantor’s hometown paper tipped its hand when it touted the House leader’s legislative work with fellow Virginian, Mark Warner. Cue up an even more glowing editorial about the Democratic senator, who also is up for re-election this year.

The Cantor-as-local-hero storyline is predictable pablum from a newspaper owned by Warren Buffett. Serious discussion of free markets — fully embraced by Brat — is subsumed by statist politics as usual.

“They have yet to report on Cantor’s onslaught of negative (and misleading) ads,” notes Brat, who gets his modest financial support on Main Street, not Wall Street.

No Democrat is on the CD-7 ballot.

Kenric Ward is a national reporter for Watchdog.org and chief of the Virginia Bureau. Contact him at kenric@watchdogvirginia.org or at (571) 319-9824. @Kenricward