DREAM TEAM: The Leaders of the Second American Revolution 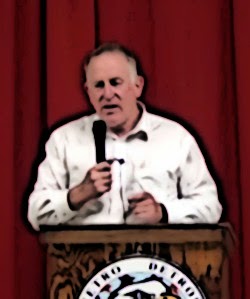 So this is what I would do if were a man like Ted Cruz.

I'd want to get that coalition together now, early, before Jeb Bush gets any money and any support. I'd want to rebuild that Reagan coalition. So I'd be going to these groups right now. And the first thing I'd say to them: I'm going to run and run early.

And I'm to put Allen West on my VP ticket.

And then, for you libertarians, I'm going to make Rand Paul my Secretary of the Treasury and he can do what he damn well wants to the Federal Reserve and the IRS. He can take them down, abolish them, do what he wants.

And then you energy voters, Sarah Palin, Secretary of Energy. Drill, baby, drill, Drill in your backyard if you want to. Two dollar a gallon gas for every American family. Keystone pipeline, open it up!

Scott Walker, Secretary of Labor. Right-to-work all over, folks, every state.

John Bolton, Secretary of State. Tell your enemies where to get off, rebuild your alliances.

Ambassador to the United Nations... no one.

Dr. Ben Carson, Secretary of Health and Human Services. End the welfare culture in this country.

And for the Christians, who often don't care about politics, but they do care about the education of their children, I'd say to them: vote for me this time and we will get rid of Common Core, we're going to get rid of the Department of Education, we're going to protect your home-schooling rights because David Barton will be Secretary of Education.

You could fill the whole cabinet, folks. Fill it now.

Would you rally to a team like that? Would you get out of bed every day, can't wait to get to the phone banks, and open your checkbook, and knock on doors to get those people in power.

And think about it, folks. You've never had a bigger team of Constitutionalists, conservatives, and libertarians, than you have today. Far more than Reagan had. And you've got all of these millions of people just itching to save their country. You've got all of these leaders out there that can't wait to gut the federal government.

You put the base with the leaders and who is going to stand in your way? Imagine, right now, you put your eggs in one basket. And they can demonize a Mitt Romney. Try and demonize 20 hard-core, Constitutional conservatives, a bunch of Rottweilers, who don't take any crap from anyone... who are all backing each other up.

You've got a team, folks. You win football with a good team. Why not win politics that way? Because you've done it before.

I love this idea. I love it.

How about Rick Perry or General Petraeus for Sec Defense?

Well Doug, you pretty much summed up the contents of my political wet dream...

One very minor difference is that if Levin couldn't/wouldn' be the AG my next dream team candidate for the AG post would Andy McCarthy at NRO...

I absolutely agree ... Love this idea! I think it would take this country by storm and the momentum to 2016 would be that of a freight train!
Any similarities to Lincoln's Team of Rivals? Fascinating stuff to think about ...
My heart leapt at each named appointment, and near left my soul when he called for Mr. Levin, Attorney General indeed! The Crowd Went Wild ...
They used to pre-announce their running mate, didn't they? My mistake if that's not correct.
The video is great, Is it linked?
Saw your post over on Mark's FB page too, Doug Ross. Hope this spreads like wildfire, cuz what we've been doing ... Ain't working'

Yessiree, that was almost orgasmic

I'd make Karl Denninger Secretary of the Treasury, but otherwise, I'd walk through fire to see this ticket happen.

I'd like to see Bobby Jindal as Secretary of State....

Whitehall, General Betrayus is a scumbag. A member of the Bildenbergs.

Dissent. No one that angry should ever be Attorney General. "Trusted advisor", maybe.

Palin - Energy Secretary for sure!

How about Trevor running himself? I mean it isn't like birth citizenship is a requirement any longer.

Absolute perfection!
Cruz/West and all the Rest 2016

NO WE ABSOLUTELY don't need another revolution that will put the conservatives in charge of the Federal Reserve's credit card. What we need is to defund the whole system and vote to change the Fed Res act of 1913 and throw the ring of power into the volcano to be destroyed FOREVER. Which would free the free market for real.
To think we would be BETTER at holding the ring than the Democrats is another march around the SAME OLD playground following a different leader. Here we go again. POP goes the weasel.

Bobby Jindal probably has a genius IQ, I'm not kidding. He made a yellow dog Dem machine state into one for the conservative side.

Not afraid of Obama but wasn't a rabble rouser during Gulf spill. With all that donated clean up machinery from the Netherlands, he finally started ignoring EPA foot-dragging and used it.

Don't remember the details now but when he was in his 20s he was appointed to clean up the state Medicaid mess and he did it.

If this man doesn't get to Washington, we don't deserve good governance. He's not a lawyer, and he side-stepped his parents' urging for science/medicine to focus deeply on policy and the elements of solid governance.

TO the extent he hasn't been hog-tied by malign Washington bureaucrat interference, he's done a terrific job.

Doesn't have the TV photogenic qualities for modern day presidency but he's got the brains and integrity to clean out the Augean stables of national bureaucracies. I'd *love* to see him let loose on the IRS. Our very own KGB would be cut down to a human, manageable size.

Someone said General Petraeus??? I refer them to John Boyd's ideas about military service. He held the generals in contempt, with certain exceptions.

Petraeus created our politically correct, murderous COIN rules of engagement. The ones where you get a medal for not shooting the enemy.

Our enemies love the guy. He's overweeningly ambitious, a skirt chaser and naive. Obama put him in charge of the CIA and then played him for a fool.

Anyone can get inside Petraeus' OODA loop. Slow and wide open.

Bobby (above) thinks Mark Levin is too angry. I think we have all had enough of the melvin milquetoast approach to combating the evil that is Liberalism today. If I had known what would transpire in this country 50 years hence, I would have supported Goldwater in 1964.

"Extremism in the defense of liberty is no vice. And moderation in the pursuit of justice is no virtue." - Barry Goldwater, 1964

I'd love to have Ted Cruz for a president if he were a natural born citizen. I know there are disagreements about what constitutes a natural born citizen, but many of us adhere to the strict founder's interpretation of it, which is that both parents of a potential president or vice president have to be U.S. citizens at the time of the candidate's birth. Supporting Cruz for POTUS puts us strict constitutionalists in a dilemma, because I, for one, will not be a hypocrite and vote for him just because I like him. And I do like him a lot.

Ted Nugent for Secretary of Defense - he will be more than happy to fill that vacancy to the UN....