Bitcoin has a flaw.  It's always been there.

Satochi Nakamoto (the nom de guerre of the mind behind Bitcoin) designed this flaw into the software because of one false assumption.  What was that assumption?  He believed that it was possible to build an open and free economic system built purely on simple self-interest (selfishness).  Lots of people make this mistake (famously, Greenspan believed that selfish decision making would prevent the banking crisis of 2008).

It's not, obviously.  Eventually, selfishness will lead one group to rig, cheat, control, etc. the system so they can get better returns.  That's exactly what happened.  Here's the flaw they exploited.

When a single entity ("a single miner" or "a mining pool") controls over 50% of the transaction processing it can control the entire system.   This means they can "see" every transaction, spend the same coins more than once, and deny transactions they don't approve of.

That's finally happened.  According to analysis from Cornell researchers, a mining pool called GHash has now reached 51% for large stretches of time (effective "ownership" is likely much less). 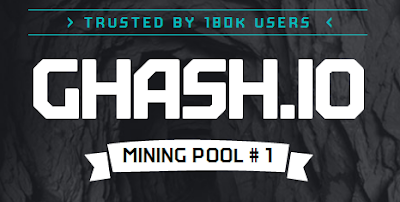 Who is Ghash?  No clue.  Obviously, this is bad thing for an "open and decentralized" currency.

However, the ability of anyone to pull this off does make the next step inevitable.  If Ghash isn't already an NSA , it most likely will be the NSA.   From the NSA's perspective, Bitcoin is a wet dream.  How so?

PS:  Any economic system that doesn't use enlightened self-interest is doomed to failure.

PPS:  Bitcoin's boiler rooms trying to pump it up to make a buck, hate this post.

at 8:28 PM
Email ThisBlogThis!Share to TwitterShare to FacebookShare to Pinterest
Labels: Scitech

Ghash is a mining pool comprised of individuals. It's not an entity with ONE will. They would all have to agree to a malicious attack which is highly unlikely.

Unknown - you still don't get it. They don't want to maliciously attack - Bitcoin is a wet dream to them. The fiat clownbuck is going down, a mathematical certainty. Having a supposed private, "encrypted" money to foist on the people - that they can monitor without cameras - is the IDEAL replacement. By the way, your assumptions about Ghash may be true, but you have no idea who the actual individuals are. Since the FedRes has made trillions in "liquidity" available, those with access could supplant your little Guy Fawkes army with a single keystroke.

This article headline tricked me SO good. I was really curious when I clicked about this new information the author had discovered.

Of course a quick read indicates that this is an op-ed piece by an uninformed writer with an agenda so thinly veiled they may as well have just written out the words "Fear Bitcoin and Fear Big Government".

Facts are hard to understand and much less glamorous than a hypothetical parade of horribles. The fact is that ghash.io adjusted their pool pretty quickly in response to this issue and even if a group of hundreds of thousands miners did suddenly turn into evil zombies willing to throw away their hugely expensive hardware investments for a 12 hour "proof if concept" to show how bitcoin is deeply flawed...the remainder of the network could just maintain non compromised copies of the bitcoin ledger and leave the bizarre kamikaze miners behind.

This issue requires a minor tweak to the protocol and will doubtlessly be addressed in the next update. In the meantime, RUN FOR THE HILLS and GIT THUH CHIL'N INSIDE. GOVAMENT'S COMIN'!!!

^^^ Lol what a manipulator. Bit Coin is a total scam. The guy above me has to use witchcraft and manipulation just to make Bit Coin sound reasonable.