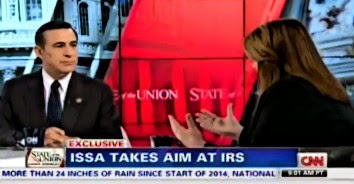 The IRS notified Congress earlier this month that Lerner, former head of the Internal Revenue Service’s tax exempt division, and several other agency employees lost emails between January 2009 and April 2011 — the time period during tea party groups were subject to additional scrutiny by the IRS — due to a computer crash. In addition, hard drives housing those emails were destroyed after computer specialists rendered them irretrievable.

Issa accused Lerner’s attorney, Taylor, of having “said things and been not correct, or disingenuous, or outright lied a number of times” during a discussion about the lack of printed copies of Lerner’s lost e-mails with CNN host Candy Crowley. Lerner, Issa said, likely “broke some laws” by providing the Department of Justice with information on tea party and conservatives groups.

Taylor, however, defended his client and accused Republicans of playing “election-year politics.”

“It’s convenient to have a demon that they can create and point to,” Taylor said of the GOP’s treatment of Lerner.

He often represents his family and their business interests in lawsuits and, occasionally, defends high-profile clients, such as former Titans player Keith Bulluck, once accused of assaulting a taxi driver.criminal defense attorney