GOOD NEWS: U.S. "Allies" Are Funding the ISIS Barbarians That Are Leaving Iraq Awash in Blood

Apparently, our beloved President is "fundamentally transforming" others areas of the world, too. Josh Rogin at The Daily Beast reports:

The Islamic State of Iraq and Syria (ISIS), now threatening Baghdad, was funded for years by wealthy donors in Kuwait, Qatar, and Saudi Arabia, three U.S. allies that have dual agendas in the war on terror. 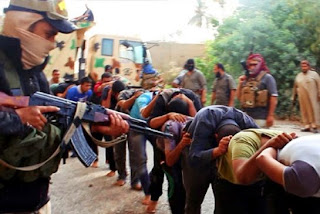 ...As ISIS takes over town after town in Iraq, they are acquiring money and supplies including American made vehicles, arms, and ammunition. The group reportedly scored $430 million this week when they looted the main bank in Mosul. They reportedly now have a stream of steady income sources, including from selling oil in the Northern Syrian regions they control, sometimes directly to the Assad regime.

But in the years they were getting started, a key component of ISIS’s support came from wealthy individuals in the Arab Gulf States of Kuwait, Qatar and Saudi Arabia. Sometimes the support came with the tacit nod of approval from those regimes; often, it took advantage of poor money laundering protections in those states, according to officials, experts, and leaders of the Syrian opposition, which is fighting ISIS as well as the regime...

...Iraqi Prime Minister Nouri al-Maliki has been publicly accusing Saudi Arabia and Qatar of funding ISIS for months. Several reports have detailed how private Gulf funding to various Syrian rebel groups has splintered the Syrian opposition and paved the way for the rise of groups like ISIS and others...

...Under significant U.S. pressure, the Arab Gulf governments have belatedly been cracking down on funding to Sunni extremist groups, but Gulf regimes are also under domestic pressure to fight in what many Sunnis see as an unavoidable Shiite-Sunni regional war that is only getting worse by the day...

I'm not exactly sure who this ISIS group is, but I suspect the Militant Quakers are behind it.

Ever since Obama came to power, these radical MQ groups seem to be increasingly terrorizing the normally peaceful countries of the Middle East: Egypt, Syria, Gaza, the Sinai, and Iraq, to name but a few. I'm sure that's just a coincidence, however.

Maybe someone should ask CAQR, the Council on American-Quaker Relations.

Will we see another scene of people desperately trying to climb on helicopters at the U.S. embassy?

I am in absolute awe of the simple way you express your love and adoration for the downtrodden ......you set a fine example for all to follow!!! Note to all; I am being facetious2105

I blame the cheese makers who are using WOOD! of all things! as racks.........they'll stop at nothing to protect their devotion to a dangerous and traditional religion......