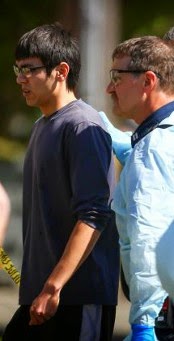 Hillary: 'It Doesn't Matter' If Bergdahl Deserted: TR
Hillary: We 'Struggled' to Buy 'Houses' After White House: WS
2001 was Hillary’s Year of Great Fortune, not of being “dead broke”: LI

Here's Why Eric Cantor Should Be Defeated: ConHQ
The Prisoner Swap Deal: Thomas Sowell
Obama Thinks He Has It Rough Now?: Rich Baehr

'I've Had Enough': When Democrats Quit on Obama: Ron Fournier
It Has Happened Again, And You Still Sit On Your Arse: Karl Denninger
VA says more than 57,000 patients are waiting for first visit: WaPo

White House doesn’t even know if new Executive Order on student loans is constitutional: Scoop
US State Dept Still Won’t Say If It Paid to Get Bergdahl Back: Bryan Preston
How the Taliban Wound Up with Stingers: Black Five

Virtual reality headset Oculus Rift meets the Bloomberg terminal: QZ
How the NSA Could Bug Your Powered-Off iPhone, and How to Stop Them: Wired
Google Embraces Docker, the Next Big Thing in Cloud Computing: Cade Metz

QOTD: "Pentagon data suggest how the police are arming themselves for ... worst-case scenarios. Since 2006, the police in six states have received magazines that carry 100 rounds of M-16 ammunition, allowing officers to fire continuously for three times longer than normal. Twenty-two states obtained equipment to detect buried land mines.

In the Indianapolis suburbs, officers said they needed a mine-resistant vehicle to protect against a possible attack by veterans returning from war.

“You have a lot of people who are coming out of the military that have the ability and knowledge to build I.E.D.’s and to defeat law enforcement techniques,” Sgt. Dan Downing of the Morgan County Sheriff’s Department told the local Fox affiliate, referring to improvised explosive devices, or homemade bombs. Sergeant Downing did not return a message seeking comment." --Matt Apuzzo, "War Gear Flows to Police Departments"

at 6:26 AM
Email ThisBlogThis!Share to TwitterShare to FacebookShare to Pinterest
Labels: Linkfest

"In the Indianapolis suburbs, officers said they needed a mine-resistant vehicle to protect against a possible attack by veterans returning from war."

Sounds bad.
Now google Gangs In Military.
He may be talking about The Chicago Vice Lords rather than the Tea Party. I hope. Maybe.

There are Goobermint plants all over the Errornet guiding people away from the truth and into an easy, benevolent believism. They are the new 'shape shifters' from an Administration having an active Ministry of Propaganda that makes knowing facts almost impossible. It is only through watching what they do that it becomes absolutely evident who they are and what they believe. I have no pity for their lemmings who trot out the foolish pap for the masses, only a confidence that one day they will be held accountable for their deceit.

President Nieto;
We're here for Andrew. Let him go or we will take him by force.