It might sound like the latest new product from Apple, but IPAB is actually the newest major legal challenge to Obamacare. 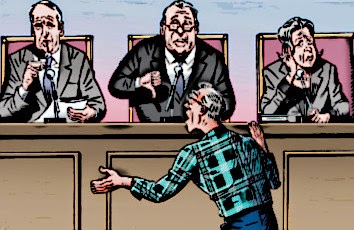 Last week, a three-judge panel in the 9th Circuit Court of Appeals in San Francisco heard arguments about the Independent Payment Advisory Board, or IPAB, a 15-member panel created by the Affordable Care Act and empowered to make all kinds of decisions regarding health coverage for Americans. The board’s powers are significant, and some say completely unconstitutional, because language in the ACA frees the board from any kind of congressional or judicial oversight.

The board, which many in the right-wing have labeled the ACA’s “death panel” after Sarah Palin coined the term in 2009, would be able to set Medicare policy and health care payment rates for virtually all Americans starting in 2017. Language in the ACA even prevents Congress from being able to repeal the IPAB’s existence after that same year.

“It’s really and truly an unprecedented concentration of power,” said Christina Sandefur, an lawyer at the Goldwater Institute in Phoenix, Ariz., who argued the case June 10 before the 9th Circuit Court.

Those challenging the legitimacy of the IPAB in the Coons v. Law lawsuit argue that it is unconstitutional for a variety of reasons — in particular, they say it violates the Fourth, Fifth and Ninth Amendments to the U.S. Constitution, while also running afoul of the separation of powers that are enshrined throughout the Constitution.

“It consolidates the powers of every single branch of government into one body, and yet it is unaccountable to any of those branches,” Sandefur told Watchdog.org on Friday.

Under the provisions of the ACA, the board would be made up of 15 presidential appointees. But in an interesting twist, all the powers of IPAB would revert to the secretary of the Department of Health and Human Services if the president does not appoint anyone to the board.

So far, no appointments have been made.

But last week’s oral arguments in San Francisco only glossed over many of the deeper, constitutional issues at play in the IPAB case.

That’s because courts are unwilling to except legal challenges until someone has been harmed by the entity being challenged, which has proven to be the major hurtle in the IPAB case.

Plaintiffs say that is the case.

Dr. Erik Novack, an Arizona orthopedic surgeon, is one of those plaintiffs. Because many of his patients are on Medicaid, Novack claims he will face declining reimbursement rates from IPAB decrees.

Attorneys defending the federal law have argued the court should not consider the case “ripe” until members of the board are appointed and it begins functioning.

It was mostly on those grounds that the case was dismissed in December by U.S. District Court Judge G. Murrey Snow.

“Plaintiff’s claim is unripe insofar as they argue that they will be forced to disclose confidential medical information to third parties,” Snow wrote.

On appeal, the issue of ripeness will be the first thing the three-judge panel in the 9th Circuit will have to decide, but there is no timetable for a decision.

If a majority of the panel sees the case as ripe, the judges will then move on to the constitutional questions. Eventually the case will likely make its way to the U.S. Supreme Court, although it may be several years before that happens.

The clock is ticking on other aspects of the IPAB, though.

Once the board begins making policy, it is insulated from congressional or judicial oversight, with Congress given only a brief window in 2017 to repeal or limit the IPAB’s powers — and it would require a supermajority to do so, per ACA rules.

After that, the board becomes the metaphorical cockroach that would survive even a nuclear holocaust.

Even among members of Congress who voted for the ACA, there are some who question the broad powers given to the IPAB under the law.

“I’ve never supported it, and I would certainly be in favor of abolishing it,” U.S. Rep. Frank Pallone, D-N.J., told Politico in 2011. “I’m opposed to independent commissions or outside groups playing a role other than on a recommendatory basis.”

Sandefur, of the Goldwater Institute, compares the situation to the recent scandal with the Department of Veterans Affairs.

She says the “silver lining” of the VA scandal is that Congress and the president have been calling for reforms since news broke of the long waiting times leading to patients’ deaths. But insulated from oversight, the IPAB would be unable to be reformed if similar scandals occurred under its watch.

The ACA gives the IPAB the authority to set policy for Medicaid, but also requires it to consider private sector consequences for the Medicaid program — that could include potentially rationing care or increasing taxes to assist Medicaid, Sandefur said.

Even though there are some limits to what the board can do, without any branch of government capable of enforcing those limits, do they matter?

“If IPAB starts making unpopular, unconstitutional or even dangerous decisions, there is really nothing we can do about it,” Sandefur said. “Its actions can’t be reviewed by the courts and Congress can’t step in to make changes.”

Boehm is a reporter for Watchdog.org and can be reached at EBoehm@Watchdog.org. Follow @WatchdogOrg and @EricBoehm87 on Twitter for more. Image hat tip: TestStripz

I'm sure the Founders and those citizens voting in the ratification process would be appalled at the IPAB.

A powerful government entity that couldn't be eliminated nor overruled. I wonder if the members could be impeached>

Say the IPAB is allowed.

What prevents a partisan Democrat congress, like the one that created the IPAB, from creating the "Dictator Congress"?

This would be only the Democrat members of the current congress with positions for life and the power to make decrees which could not be reviewed by courts or the regular congress.

That possibility underlies the long standing principle that no congress can bind a future one. All laws can be repealed, including the IPAB. Why are the courts going along with this?

Seems to me that any statement in a law that future Congresses are not allowed to amend or repeal the law is just wasted ink. If a legislative body could make a law cast in concrete forever just by saying so, wouldn't they do that all the time, whenever they thought that at the next election a different party might come to power? A future Congress could simply declare that they are repealing the part of the law that says that panel can never be abolished, and then abolish it. I suppose a corrupt enough Supreme court might strike that down. But if they did, I think we would quickly see EVERY controversial law having such "can never be repealed ever" language attached to it.

So wait ... the supporters of Obamacare are assuring us that there are no death panels in the law, and also that the death panels can never be abolished?

Stupidity is still yet to be a Defined (AMERICAN STYLE) !!

AMERICANS ARE A STUPID PEOPLE