No one questions John McCain's credentials as a war hero. A POW. A man.

It is his decision-making as a politician, however, that has dramatic and far-reaching ramifications for every American. Those decisions have -- almost uniformly -- been wrongheaded and ill-conceived.

Isn’t it nice to know that the US government is talking out of one side of their mouths and doing the complete opposite on the other side? Remember in 2013 when John McCain made that trip to Syria to hang out with ISIS radicals? Now, ISIS is using that photo of them hanging with John McCain as propaganda for themselves. 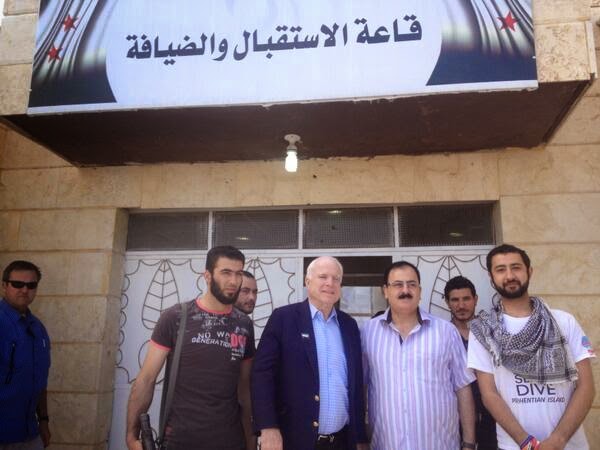 ...This 2013 photograph of John McCain is being circulated by members of ISIS as a photo of him with members of some of their members in Syria... The poster does not specify which of the men is actually from ISIS or “Al Qaeda In Iraq” as they were once called.

Gee, are they ISIS or "Al Qaeda in Iraq"? I'm so confused. Maybe we can check their laminated membership cards.

McCain is a disgrace. I don't care what he did or happened to himn 40+ years ago - he is on the WRONG side of America when it comes to these barbarians. I don't know if it's Stockholm Syndrome holding on to him, or what. But, he is seriously mistaken about any Muslim or Islamist "tribe" not hating America and not wanting to annihilate us. What is wrong with him? Ugh . . . I can't believe Arizona would elect him. He is not that smart and has married a wealthy woman to "fund" his political career. He is ridiculous and, now, a traitor.

After reading many accounts given by his fellow prisoners and an article detailing his failures at the Naval academy and as a pilot, I think the hagiographic depiction of McCain as a hero has only served to mask another low life politician. A failure as a human being.

Tsk Tsk John. Wonder what your former running mate Sarah Palin has to say about this.

Truly a shame traitor McCain came home from Vietnam. He shoulda stayed there.

He pals around with homegrown terrorists too... tea party traitors....

Not that I doubt this much but can we at least get a link to some proof that ISIL is truly using this?

Maybe a link to the "ad campaign" itself?