IN CASE YOU'RE THINKING OF GOING TO A HILLARY BOOK-SIGNING: Here are the Rules

On Tuesday morning, Hillary Clinton kicked off her book tour promoting new release "Hard Choices", Hillary's "I'm running for President" tome that is all the buzz this week. One of the first folks in line for a signed copy was Maggie Haberman of Politico, who tweeted the list of guidelines handed out by handlers for those waiting. Haberman tweeted a picture of those rules. 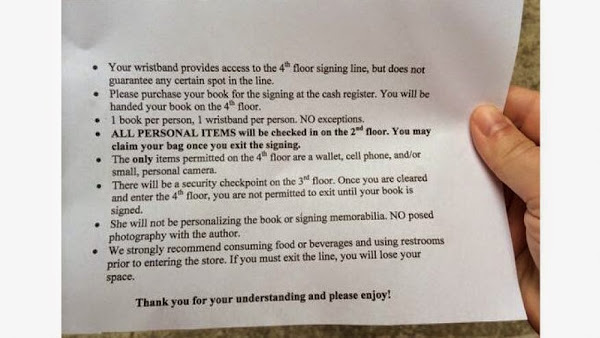 ...Use the bathroom before getting in line because you will lose your place. If this were a polling place Ed Schultz would call it racist disenfranchisement.

Howe was also able to obtain a secret second page of rules, regulations, requirements and advisories.

I have not yet confirmed whether attending the book-signing required a photo ID. If so, I fully intend to notify Eric Holder that Hillary's book-signing events are raaaaaaaaacist.

Off topic, Doug, but I can't find the "contact" button.

You gotta see this. A news report that tells the truth, and starts the "conversation" that America needs to have.

This must be the one local news crew in America that doesn't understand Fight Club rule 1, "There is no Pravda in Izvestia, or else."

Bet they have to pay people to attend her book signings.