The Intrigue Behind Iraq's Meltdown

Events in Iraq over the past week were perhaps best crystallized in a series of photos produced by the jihadist group the Islamic State in Iraq and the Levant. Sensationally called The Destruction of Sykes-Picot, the pictures confirmed the group's intent to upend nearly a century of history in the Middle East. 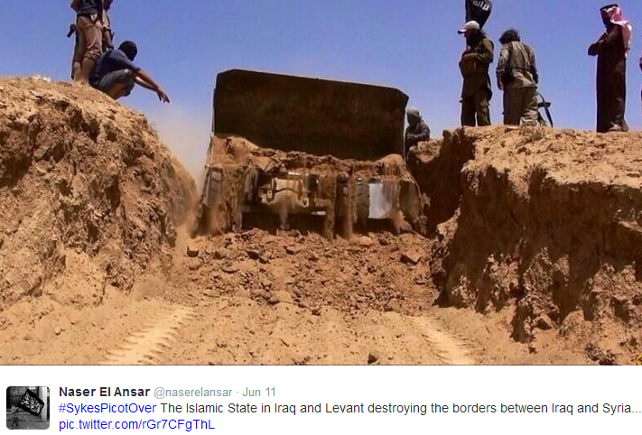 In a series of pictures set to a purring jihadist chant, the mouth of a bulldozer is shown bursting through an earthen berm forming Iraq's northern border with Syria. Keffiyeh-wrapped rebels, drained by the hot sun, peer around the edges of the barrier to observe the results of their work. The breach they carved was just wide enough for the U.S.-made, Iraqi army-owned and now jihadist-purloined Humvees to pass through in single file. While a charter outlining an antiquated interpretation of Sharia was being disseminated in Mosul, #SykesPicotOver trended on jihadist Twitter feeds. From the point of view of Iraq's jihadist celebrities, the 1916 borders drawn in secret by British and French imperialists represented by Sir Mark Sykes and Francois Georges-Picot to divide up Mesopotamia are not only irrelevant, they are destructible.

Today, the most ardent defenders of those colonial borders sit in Baghdad, Damascus, Ankara, Tehran and Riyadh while the Europeans and Americans, already fatigued by a decade of war in this part of the world, are desperately trying to sit this crisis out. The burden is on the regional players to prevent a jihadist mini-emirate from forming, and beneath that common purpose lies ample room for intrigue.

Turkey Searches for a Strategy

With the jihadist threat fanning out from Syria to Iraq, Turkey is struggling to insulate itself from the violence and to follow a strategic agenda in Iraqi Kurdistan. Turkey has forged an alliance with the Iraqi Kurdish leadership in a direct challenge to Baghdad's authority. With the consent of Turkey's energy minister and to the outrage of Iraqi Prime Minister Nouri al-Maliki, two tankers carrying a few million barrels of Kurdish crude left the Turkish port of Ceyhan in search of a buyer just as the Islamic State in Iraq and the Levant was ratcheting up its offensive. Upping the ante, Turkish Energy Minister Taner Yildiz announced June 16 that a third tanker would be loaded within the week. With al-Maliki now relying on Kurdish peshmerga support to fend off jihadists in the north, Ankara and Arbil have gained some leverage in their ongoing dispute with Baghdad over the distribution of energy revenue. But Turkey's support for Iraqi Kurds also has limits.

Ankara had planned to use a tighter relationship with the Kurdistan Regional Government to exploit northern Iraq's energy reserves and to manage Kurdish unrest within its own boundaries. However, Turkey never intended to underwrite Kurdish independence. And with Kirkuk now in Kurdish hands as a result of the jihadist surge, the largest oil field in northern Iraq stands ready to fuel Kurdish secessionist tendencies. Much to Turkey's dismay, Kurdish militants from the Kurdistan Workers' Party and the People's Protection Units are already reinforcing peshmerga positions in northern Iraq. At the same time, the Islamic State in Iraq and the Levant and its jihadist affiliates are holding 80 Turkish citizens hostage.

Turkey will thus enlarge its footprint in Mesopotamia, but not necessarily on its own terms. Some 1,500 to 2,000 Turkish forces have maintained a quiet presence in Iraqi Kurdistan. That force will likely expand now that Turkey has an array of threats to justify such a presence and a growing need to temper Kurdish ambitions. Iraq's Kurdish leadership will be reminded of their deep distrust for Turkey but will also be overwhelmed by its own challenges, not least of which is Turkey's main regional competitor, Iran.

Iran on the Defensive

Unnerved by Turkey's increasingly assertive Kurdish policy and possibly in anticipation of the expanding jihadist threat sweeping Iraq's Sunni belt, Iran over the past several months has been expanding its military presence along its northern border with Iraq. Tehran now finds itself in the uncomfortable position of having to reinforce its Shiite allies in Iraq militarily. Though Iran has perhaps the most sophisticated and extensive militant proxy network in the region to do the job, this strategy carries enormous risks.

Iran has spent recent years painstakingly trying to consolidate Shiite influence in Iraq under a central authority in Baghdad. Tehran was never wedded to al-Maliki in particular, but it did need to maintain a strong enough foothold in Baghdad to manage Iraq's naturally fractious Shiite landscape. Employing Shiite militias enables Iran to reinforce the Iraqi army in a time of urgent need but risks undermining Iran's long-term strategy to manage Iraq through a firm hand in Baghdad. The more empowered the militias and the weaker Baghdad becomes, the harder Iran will have to work to keep a lid on separatist moves in Iraq's Shiite south.

The militants rampaging through Iraq's core Sunni territories will embrace deeper Iranian involvement in the conflict. There is no better motivation for Arab Sunni fighters of various ideological stripes than a call to arms against their historical Persian foes and their Arab Shiite allies. An outpouring of sectarian blood feuds will also make it all the more difficult for Iraq's Shiite government to recruit enough allies among Iraq's Sunni population to fight against the jihadists. Indeed, the Islamic State in Iraq and the Levant would not have been able to mount its lightning surge across Iraq had it not been for the substantial support it has received from local Sunni tribes who in turn receive substantial support and guidance from sponsors in the Persian Gulf. Our attention thus turns to the Saudi royals sitting quietly in Riyadh.

This has not been a good year for the Saudis. A Persian-American rapprochement is a living nightmare for the Sunni kingdom, as is the prospect of the United States becoming more self-sufficient in energy production. Saudi Arabia has little means to directly sabotage U.S.-Iranian negotiations. In fact, as we anticipated, the Saudis have had to swallow a bitter pill and open up their own dialogue with Iran. But the Saudis are also not without options to make life more difficult for Iran, and if Riyadh is going to be forced into a negotiation with Tehran, it will try to enter talks on its own terms.

Syria and Lebanon always make for useful proxy battlegrounds, though a Sunni rebellion has little chance of actually toppling the Iranian-backed regime in Damascus, and Lebanon is too fragmented for any one regional player to claim a decisive advantage. The contest has thus shifted back to Mesopotamia, where Iran cannot afford to see its Shiite gains slip and where Saudi Arabia -- both the government and private citizens -- has maintained strong ties with many of the Sunni tribes in Anbar and Mosul provinces that have facilitated the Sunni uprising. There is no love lost between the Saudis and the Islamic State in Iraq and the Levant. In fact, the Saudis have branded it a terrorist organization and have even uncovered cells of the group on Saudi soil plotting against the kingdom.

But the Islamic State in Iraq and the Levant is also not the only group participating in the current offensive. Former Baathist fighters from the Naqshabandiyya Way along with Jaish al-Mujahideen and Jaish Ansar al-Sunnah are also playing a substantial role in the fighting. Most of the Sunni militias and the growing number of Awakening Council (Sunni fighters recruited by the United States to battle al Qaeda in Iraq) defectors joining these militias coordinate directly with the Majlis Thuwar al Anbar (Anbar insurgents' council), which in turn coordinates with the Islamic State in Iraq and the Levant on a selective basis. Saudi Arabia's acting intelligence chief, Yousef bin Ali al Idrisis, is believed to be in direct communication with the Majlis Thuwar al Anbar, affording Riyadh the opportunity to influence the shape of the battlefield -- and thereby to aggravate Iran in a highly sensitive spot.

As a bonus for Saudi Arabia, even as the Sunni uprising is largely confined to Iraq's Sunni belt and thus unlikely to seriously upset Iraq's production and exports from the Shiite south, the price of Brent crude has climbed to $113 a barrel for the first time this year. Saudi Arabia is not the only one that welcomes this bump in the price of oil; Russia is quite pleased with the outcome in Iraq as well.

Revisiting a Mysterious Meeting in Sochi

Just days before the Islamic State in Iraq and the Levant-led offensive in Iraq, a quiet meeting took place at Russian President Vladimir Putin's vacation spot in Sochi on June 3. Putin invited Saudi Foreign Minister Saud al-Faisal to see him and Russian Foreign Minister Sergei Lavrov, who cut short an engagement in Moscow to get there on time. Details on the meeting are scarce. Our attempt to obtain information about the gathering from Russian and Saudi contacts resulted in scripted and strangely identical responses that claimed that Saudi Arabia and Russia were discussing a power-sharing resolution for Syria. The state-owned Saudi Press Agency then reported June 10 that Lavrov and al-Faisal had a follow-up phone conversation to discuss a Syrian settlement. Syria may well have been on the agenda, and Russia has an interest in protecting its influence in Damascus through a deal that keeps Syrian President Bashar al Assad in power, but we suspect there was more to these engagements.

Both Saudi Arabia and Russia share two key interests: undermining the U.S.-Iranian negotiating track and ensuring oil prices remain at a comfortable level, i.e., above $100 a barrel. There is little either can do to keep Iran and the United States from negotiating a settlement. In fact, the jihadist threat in Iraq creates another layer of cooperation between Iran and the United States. That said, Washington is now facing another major Middle Eastern maelstrom at the same time it has been anxiously trying to prove to itself and everyone else that the United States has bigger issues to deal with in other parts of the world, namely, in Russia's backyard. Moreover, the United States and Turkey are not of one mind on how to manage Iraq at a time when Washington needs Ankara's cooperation against Russia. If an Iraq-sized distraction buys Moscow time to manage its own periphery with limited U.S. interference, all the better for Putin. Meanwhile, if Saudi Arabia can weaken Iran and test U.S.-Iranian cooperation, it might well be worth the risk for Riyadh to try -- at least for the time being.

A Lesson from History

Whether by mere coincidence, strategic design or a blend of the two, there are as many winners as there are losers in the Iraq game. Russia knows this game well. The United States, the heir to the Sykes-Picot map, will be forced to learn it fast.

When the French and British were colluding over the post-Ottoman map in 1916, czarist Russia quietly acquiesced as Paris and London divided up the territories. Just a year later, in 1917, the Soviets threw a strategic spanner into the Western agenda by publishing the Sykes-Picot agreement, planting the seeds for Arab insurrection and thus ensuring that Europe's imperialist rule over the Middle East would be anything but easy. The U.S. administration recognizes the trap that has been laid. But more mindful of the region's history this time around, Washington will likely leave it to the regional players to absorb most of the risk.

The Intrigue Lying Behind Iraq's Jihadist Uprising is republished with permission of Stratfor.